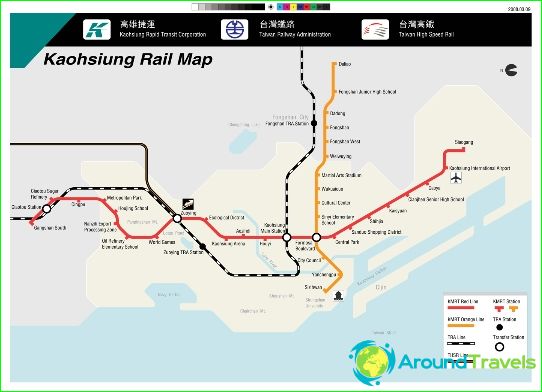 Metropolitan Taiwan Kaohsiung City wasIt opened in March 2008. Today, it has two routes on which 38 stations built for the passengers. In the year of the metro Kaohsiung capable of carrying up to 55 million people. The length of the two lines of the subway is almost 43 kilometers.

The first and longest metro branch of Kaohsiungmarked in red on the diagrams. It connects Xiaogang in the south of the city with Tsyaotousskim station in the north. The length of the route exceeds 28 kilometers, and for entry and exit of passengers is equipped with 23 stations.

"Orange" branch number 2 on the subway KaohsiungIt runs from west to east and connects the station Sitszyvan and Dalia. Its length is nearly 15 kilometers away, and the passengers of "orange" line can take advantage of 14 stations.

All the station names and information on the schemestablets in the subway Kaohsiung performed in two languages: Chinese and English. Train cars are equipped with air conditioning system, and the station - escalators and elevators for people with disabilities.

Train Cars are different from others in Chineseunderground presence of green seats in cars. This color prefer the Democratic Progressive Party. Its influence on the political life of Taiwan, where the city of Kaohsiung, very much.