Home>Articles about Turkey>Articles on Istanbul>Airport in Istanbul - "Ataturk": diagram photo. How to get to Istanbul airport

Airport in Istanbul - "Ataturk": diagram photo. How to get to Istanbul airport 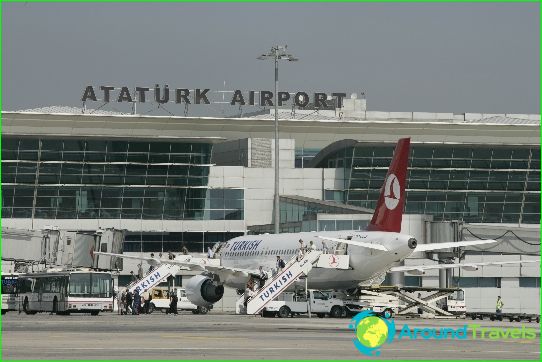 In the vicinity there are two airports in IstanbulInternational values: Airport Ataturk Airport and Sabiha Gokcen opened later in order to relieve the first. Airport Istanbul Ataturk is the first air gates of the city. It is located in the European part, in the 23-24 km from the Sultanahmet Square, not far from the shores of the Sea of ​​Marmara. In the eighties, it was renamed in honor of Mustafa Ataturk - the first president of the Turkish Republic.

The complex consists of two terminals of the terminal,who work with domestic and international flights. The main airport in Istanbul linked to key Russian Airports with direct flights that connect the capital city of Turkey with cities such as Moscow (Sheremetyevo, Domodedovo and Vnukovo), St. Petersburg and Yekaterinburg, Rostov-on-Don and Ufa, Kazan and Sochi.

Modern international airport in IstanbulIt provides services in the excellent European level. On the territory of the terminal there is a hotel, in which there can be from any terminal, as well as on the county, near the air-port hotels are major international hotel chains. For the convenience of visitors at the airport coffee shop companies such as Starbucks and Gloria Jean's, Café Burger King, as well as a hair salon, pharmacy and post office, book shops and kiosks with periodicals. In addition, passengers can use the service storage rooms, as well as free internet access Wi-Fi.

With the city airport in Istanbul linked linelight rail, which is given for 30-35 minutes allows passengers to get in Aksaray district. Apart from the metro, the airport administration has offered guests the services of the bus messages that are sent to various parts of the city with half-hour intervals. Not far from the airport station has a high-speed boat from the following areas to the district Bakyrёy Bostanzhi and Kadıköy. Slower, but cheaper alternative bus transfers airport - it is the urban routes messages. For those who prefer to travel by car in the airport arrivals area settled by representatives of well-known agencies offering car hire services, as well as have the opportunity to take a taxi.

Rent a Car in Thailand. Car Rental in ...

The capital of Cyprus: map, photo. What is the capital in the ...