Home>Articles about Turkey>Articles on Istanbul>The streets of Istanbul - photo, name. List of famous streets in Istanbul

The streets of Istanbul - photo, name. List of famous streets in Istanbul 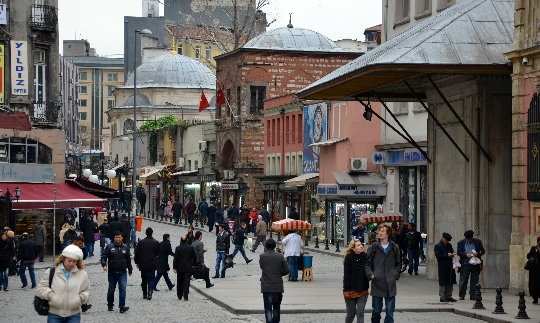 The beautiful city of the world is considered to Istanbul. The city is full of attractions, preserved from different periods of time. Streets of Istanbul leave an unusual appearance, because they are a mixture of different styles. Many streets are tortuous and winding. The city is located in hilly terrain, which is reflected in the architecture. The streets at different levels, which are connected by stairs. Navigate the city very difficult, even if you have a detailed map. The desired structure is difficult to find the right place.

This reminds Istanbul street Fifth Avenue. On Istiklal located Pasaji, various galleries, clubs and shops. Street is considered the symbol of Istanbul and the busiest place in town. To feel the atmosphere of the metropolis, it is recommended to walk on it.

Along the boulevard of Istiklal located:

Istiklal Avenue is considered the soul of the city. The street is located in the tusovka and popular area of ​​Istanbul.

In one of the Asian parts of the city is locatedBaghdad street. It is the center of the city trade. Earlier extension line was 6 km. Street was founded on the site of road connecting Anatolia to Constantinople. After the construction of the Bosphorus Bridge, which connects the Asian and European parts of the metropolis, the street became popular. Today, it attracts fans of entertainment and shopping. It is famous for its prestigious art galleries, shopping centers and boutiques.

Istanbul's historic center and its mainarea is called Sultanahmet. This area is located on the headland between the Sea of ​​Marmara, Bosporus and the Golden Horn. Here are concentrated the historical attractions of the city. Among them - the cathedral of Hagia Sophia, Blue Mosque, ancient columns, the Obelisk of Theodosius, a majestic fountain and others.

The most expensive and beautiful areas of IstanbulNisantasi is considered. There is seething life on weekdays and holidays. The appearance of the area close to the west. Among the modern buildings there are old buildings. By region include Vale Street Conan Teshvikie et al. Nisantasi is known for its luxury boutiques.