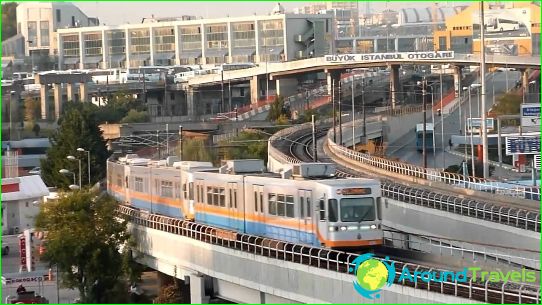 Old Turkish capital - one of the mostunique cities in the world that has managed to stay in two parts of the world, bordering the Black Sea and the Marmara Sea and is situated in a beautiful hilly area. But it attracts thousands of tourists and rich history, ancient monuments, beautiful oriental architecture. You can walk through the narrow streets and markets of the medieval old town and then pay a visit to the business and cultural center of Beyoglu, which means new city.

Transport in Istanbul - an amazing sight,few tourists decide to take advantage of the movement of a conventional city bus, but prefer to enjoy the locals who like bunches of grapes hanging from pegs in the rush hour.

Buses are divided into public and private,which differ in color. The fare is the same, but each has a private conductors selling tickets. To travel in the public bus ticket is bought at the last station or from street vendors, of course, is already at a premium.

Between the bus and taxi

An intermediate position is occupied dolmushi -Istanbul view taxi. Riding in it is much more convenient than in a crowded city bus and cheaper than the private cab. Machines running on different routes, different color:

In Istanbul, you can watch the amazing thing -there are three branches of the metro, but between them they have nothing to do. The shortest line has only two stations, but with it you can very quickly get from Tünel Square to the waterfront of the Golden Horn, which has long been the main source of income.

Tourists who come to Istanbul and decided to take the subway, it is worth remembering that each branch has its own mode of operation.

The most convenient way to get around the formerthe Turkish capital, besides the cost of services is much lower than in other tourist centers of the world. However, local taxi drivers are trying to change it to his side, giving the cost of travel to the eye and explain that the meter was broken. But any movement of the passenger to exit instant way repairing a cunning device and flying around the city provided. Night tariff, as elsewhere, above the daily.

Another feature of skiing in Istanbul by taxi - it's toll bridges over the Bosphorus, and the money it brings passenger, not the driver.

Rest in Montenegro in May: prices and ...

Holidays in India in October: prices and ...