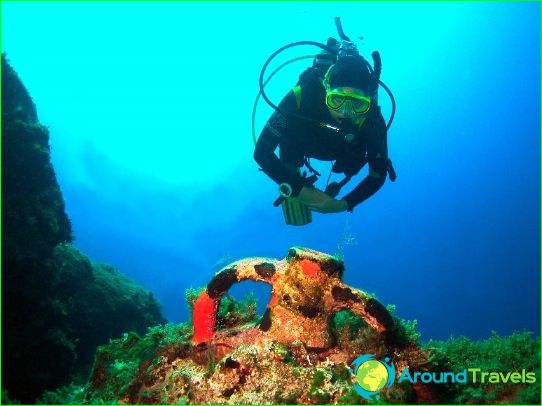 Diving in Turkey is not possible without the presence ofinternational certificate confirming the passage of appropriate training. But the dive sites of this country are great, so it's worth to get this document.

There are more than 50 excellent dive sites. Aegean sea in the area conceals in its depths the remains of an ancient civilization. Here you can admire not only the coral gardens, but also to see the ancient ruins, miraculously preserved for such a long time.

Bodrum has twelveofficial dive sites. The local water is incredibly transparent, so even when submerged 30 meters is no problem with visibility does not arise. During the summer, water is heated to a comfortable 27. Diving is possible all year round, a season dive is considered open from the end of April.

The most popular place - Orak Island. Numerous underwater caves and steep wall, leaving on a hundred-meter depth, attract many divers.

Sea depths near the island Kechek will be very interesting to fans of antiquity, because here you can swim among the ruined ancient settlements.

waters of dive sites, is located not far fromGallipoli Peninsula, will be extremely interesting to history buffs. The local bottom is almost completely littered with debris of ships and aircraft from the First World War. They are vivid evidence of a failed joint Anglo-French military campaign against the Turks. Especially interesting in this regard Chinakkale area and water up to the Salwa Bay.

The bottom is not far from Chemical was the lasta haven for war "British", which sank just 27 meters from the coast. And today you can still inquire what is in the hold, "Lundy", because it remains virtually untouched.

Also divers love to dive for the remaining unidentified warship, sank not far from the Gulf of Anzac. The popularity of this dive site due to its proximity to the beach area.

It is a port city in the vicinity of which theremany interesting dive sites. Particular attention is paid divers departed to the bottom in 1915 warship, belonged to the UK - "Majestic". But to explore the ship, you must obtain a permit.

About Chinakkale are several specialpopular dive sites and one of them - the Gulf of Saros. He hides in a huge North-Antalya fault. See it come many benefit from Istanbul to get here long. The waters of the Gulf is very clean and so the visibility is always excellent. Water areas Saros chose their home turtles. Sometimes you can meet with a Mediterranean seal.