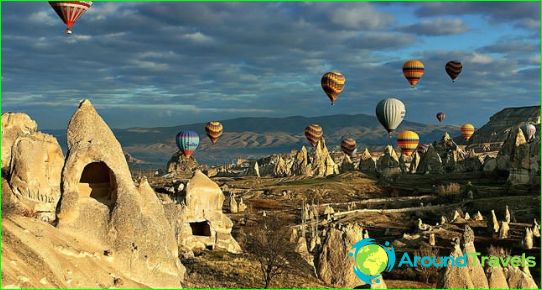 This country has long been a Russian health resort, andalmost every citizen of our country, having zagranpaspot, been here at least once. Occupying the 36th largest in the world, Turkey is washed by four seas, which is what makes it so tempting for an eager for sunbathing and sea bathing tourists. Separation of the territory of the 81 provinces, historically, and each of these areas in Turkey differs not only by the climatic and geographical conditions, but also on the number of inhabitants and the availability of interesting places for tourism.

In the list of provinces, called the country oozes,have names that begin nearly all the letters of the Russian alphabet. For example, Iğdır and Isparta - quite ordinary Turkish word, but because of Erzurum, Elazığ and Hakkari in general very few people are able to surprise.
The largest number of residents - Ill Istanbulwhere the last census recorded the eleven millionth citizen. Least of all Turks chose their home yl Tunceli in eastern Anatolia, because most of the territory it occupied the ridges. According to the Turkish field with the beautiful name Aksaray once ran the Great Silk Road, and its capital of the same name attracts tourists proximity Cappadocia Valley with its unique natural formations, medieval buildings and a water park with artificial waterfalls.

The names of at least two regions of Turkey's greatfamiliar to the average Russian traveler. One of them - the incomparable Antalya, where every day in high season start aircraft. Their sides are languishing in anticipation of a better life leave thousands of emaciated gray gritty Russian tourists. The beaches of Antalya, Alanya, Side and Kemer and hotels with convenient and practical "all-inclusive", the abundance of buffets and inspiring work of animators, active fun on the water and a romantic evening in the best restaurants with sea views - all this resort region of Turkey with pleasure It offers its loyal fans.
sludge name Muğla responds warmly in the hearts of thosewho prefer the Turkish resorts on the Aegean Sea. Fethiye and Bodrum are more pleasant climate and wonderful opportunities for historical research. In this area of ​​Turkey are the ruins of the ancient city of Halicarnassus, and Letoon, included in the list of UNESCO World Heritage Site.

Holidays in Cyprus in August: prices and ...