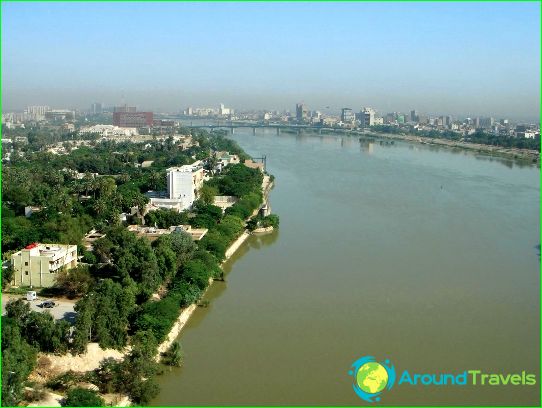 The majority of Turkey's rivers are completely unsuitable for navigation, as the course of the flow has numerous rapids. Some of them are completely dry in summer.

The maximum width of the riverbed - 500 meters ata depth of 10 meters. During the period of seasonal flood water level in the Euphrates can be raised by 4 meters higher than normal, leading to severe flooding of coastal areas.

The upper course of the river has a mountainous character,paving their way into a narrow gorge. Only after entering the Mesopotamian Plain transformed into a typical lowland river. The main tributaries of the Euphrates are Habur; Belih; Tokma; Goksu.

In its upper reaches riverbed runs along the bottomnarrow gorges and there Arax - a typical fast mountain river. After leaving the territory of Ararat valley river banks are omitted, and the Aras is divided into channels.

The source of the river is located at an altitude of 3000 meters above sea level on the slopes of Bingöl. Overcoming his thousand kilometers Arax completes the path merges with the waters of the Kura.

The river passes through the territory of the Armenian Plateau in Turkey and has a total length of 722 kilometers. Murat - one of the main tributaries of the Euphrates.

The source of the river is located in eastern Turkeynear Mount Ararat. The channel runs along the valley of the Armenian highlands. The river is characterized by significant variations in water level. Maximum rise recorded in April and May. At other times, the river is relatively shallow.

Murat navigable throughout. Some parts of the river in the winter can freeze.

Source, as well as the upper, it is locatedPhrygia territory - one of the historical regions of the country. The mouth of the river - the water of the Black Sea (area Bithynia). The main attraction of the river - the bridge Beshkёpryu, a length of 430 meters.