Home>Articles about Turkey>What is the currency in Turkey - import, exchange. Turkey Money

What is the currency in Turkey - import, exchange. Turkey Money 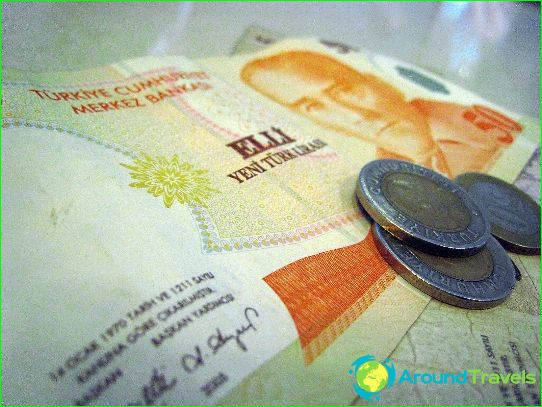 What currency to take to Turkey

It is difficult to answer the question of which currency to atake in a given country. This is due to the fact that in different regions of the country different preferences. For example, the town of Side prefers euro, as It is a German area. In addition, some areas will prefer dollars. But the euro and the dollar - it's not the only option. It is also possible to use, for example, Russian rubles or hryvnia.

Possible answers to the question of which currency to take inTurkey given above. Now it is necessary to talk directly about the exchange of the local currency imported. Import of currency is not restricted to Turkey, ie You can bring any amount of foreign currency.
Immediately is to say that in most airports, there are exchange offices, but the exchange rate there is very disadvantageous.
As for the course, on September 2014. 1 dollar is equal to 2.27 Turkish lyres. Accordingly, about this course should expect when traveling to Turkey.
Currency exchange can be carried out in Turkey in the mail,banks or official exchange offices. It is necessary to avoid the small exchange offices, which are likely to operate informally. Often, it's just scammers.
We should not forget that Turkey is not listed money outside shit, so when going from Turkey, it is necessary to carry out a reverse exchange.

In resort regions of Turkey and you can not exchangecurrency, especially during their stay in the country plans to buy a couple of souvenirs. There are a large number of stores that sell goods in foreign currency, for example, for dollars.
For travel by public transport can also beto pay in foreign currency, but it is worth to monitor the delivery of the driver did not give her the Turkish Lira. It turns out a kind of exchange, however, quite disadvantageous exchange rate.

Nowadays, credit cards are very common, so the money can be stored in Turkey is on the cards. Most shops, cafes, restaurants accept payment by VISA and Master Card.
In addition, you can withdraw cash at ATMs, which will be issued by the Turkish Lira. There are daily limits, which make up 400 dollars or 350 euros.

Airport in Washington diagram photo. How to get ...