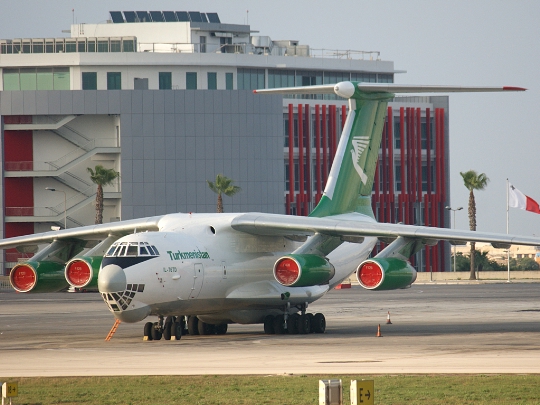 Here the Great Silk Route, and it seemsthe ancient city, is now remembered caravans, majestically floating in the sands of the Karakum desert. Today, to get to the heart of the great desert is much easier - Airports Turkmenistan take daily flights from Russia and other countries. Ashgabat and Moscow associate direct flights "Turkmenistan Airlines". The journey time is 3.5 hours.

Of the seven airports Turkmenistan statusinternational capital have only in Ashgabat and Turkmenbashi air harbor town in the west of the country. Last except when it takes only domestic flights from Istanbul.

Ashgabat airport is located 10 kmnorthwest of the capital of Turkmenistan. Its grand opening took place was named after the first president of Turkmenistan, Saparmurat Niyazov in 1994 and air port. The modern terminal is able to accept and serve more than 1,500 passengers per hour, offering guests the use of a convenient and varied infrastructure:

and currency exchange works at the airport, help desk, ticket office "Turkmenistan Airlines" and offices of air carriers included in the composition of the Star Alliance.
Under construction is a new terminal of the capital of Turkmenistan International Airport, which is planned to be commissioned in 2016.

Today, the capital of Turkmenistan, you can get onthe wings of several carriers, principal among which are the local "Turkmenistan Airlines". They have to schedule regular flights from Almaty, Ankara, Bangkok, Beijing, Delhi, Dubai, Frankfurt, Minsk, St. Petersburg, Moscow and Paris.
Among foreign carriers frequent guests onairfield became China Southern Airlines, "Belavia", Flydubai, Turkish Airlines, Lufthansa and the S7, on whose wings can be direct in Urumqi, Minsk, Dubai, Istanbul, Frankfurt and Moscow.
For the transfer to the city it is easiest to use a taxi or public transport - stop is at the exit of the terminal.

On the shores of the Caspian

Air Harbor Turkmenbashi has been put inoperation in 2010. The city where the airport is located, is situated on the Caspian Sea and is a major international port and the center of the country's refining industry.
Main flights schedule Turkmenbashi -internal. The city is connected with regular flights Ashgabat, Mary and Dashoguz Turkmenbadom. In addition, the board of "Turkmenistan Airlines" fly from here to Istanbul.
The international status of stress and border control points, and a modern infrastructure of Turkmenbashi.

The population of Canada. Population in Canada: features, ...