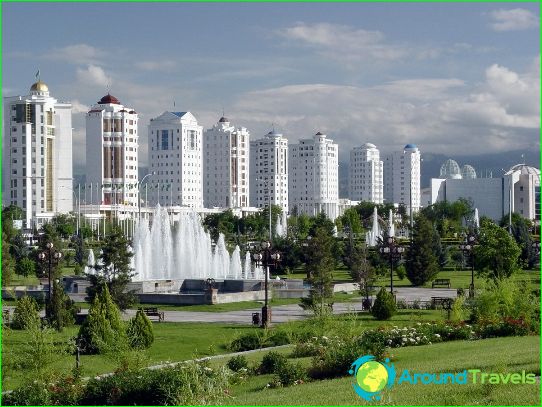 White marbled capital Ashgabat is called not onlyresidents of Turkmenistan, but the founders of the Guinness World Records. In the capital of Turkmenistan, more than five hundred architectural projects lined this noble stone that turns the city into a noteworthy tourist destination. However, during the tour of Ashgabat is something to see and besides marble palaces. Book of Records keeps a record of the world's largest fountain complex and the highest flagpole. Closed the Ferris wheel and the architectural embodiment of the stars in the TV tower, too, has no equal in any other city of the world.

Ashgabat was not always so brilliant. At the end of the XIX century that appears on the map of the Russian Empire, the new cross-border military settlements dominated adobe hut. Then the city received the status of the administrative center of the Trans-Caspian region, and in 1925 became the capital of the Turkmen Soviet Socialist Republic.
The city is situated on the south of the country, just 25kilometers from the Iranian border. The valley, which lies Ashgabat, limited to the Karakum Desert and the Kopet Dag mountains, and is an oasis to which they brought from the Amu Darya the Karakum Canal.