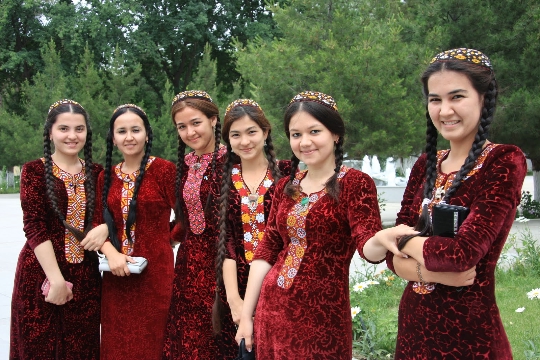 In the East and in Central Asia made welcomewelcome guests. The reason for that, to a large extent, are the roots of the local Muslim tradition. Guest, according to Turkmen, sent by Allah, and therefore he should have the honor, respect, and acceptance by the very highest class. Caught in the Middle Asia, the traveler receives a huge number of nice and exotic experiences that promises to yourself to come back to this area again and again. Traditions Turkmenistan and culture of this interesting country strengthens its every guest in the desire to come to the edge of the desert and welcoming people again and again.

Familiarity with the Turkmens

For residents of Turkmenistan neprekoslovny authorityIt is the word older. Respectful attitude to his father or grandfather in their blood, and no inhabitant of the country will not argue with the senior or to question his word.
No less respect for local custom callsresidents to keep the word. A noble man, according to the Turkmen always fulfill the promise to tell the truth, will not gossip or harm a neighbor. Cowardice, cowardice and chatty - not a real man of honor and tradition, because Turkmenistan require little to say and a lot to do.
Having received an invitation to sit down to the table, it does not matteroffend a host failure. Even a small note here is worth its weight in gold, and therefore is to adopt the proposed bowl with green tea and take a few minutes the man cordially invite you to visit.

It was so many years account for traditionTurkmenistan in carpet weaving. The first rugs date back to the Pazyryk culture, media residing in the territory of today's Turkmenistan. In those days weaving carpets for a variety of purposes. They hid in the tent floor, curtain entrance to the home, they were made of travel bags. Carpets were a symbol of wealth and power, they were given a dowry and used as money.
Ancient traditions of Turkmenistan carefullysaved by modern masters of carpet weaving. In 2003, the largest in the history of mankind Turkmen carpet became the Guinness record. The country has even officially celebrating the Day of the carpet, which has been declared a non-working.