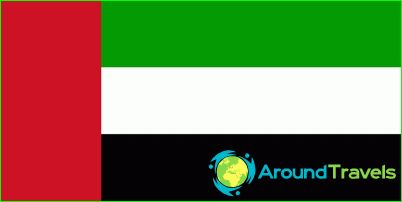 It was established in 1971 an independentState of the United Arab Emirates, and in the same day, December 2 was adopted by one of the state symbols of the new countries - the UAE flag. It has the shape of a rectangle, the length of which refers to the width in the ratio 2: 1. The panel is divided into four parts, a cloth made of various colors.

located along the vertical shaft of the flagband of bright red color, which occupies a quarter of the length of the rectangle. Other field consists of three horizontal strips of equal width. The bottom is black, medium - white, and the top - green.

Residents of the Emirates are proud of their flag and thought,it reflects the richness of their homeland, the fortitude of its people, the beauty of nature. The flag, according to analysts, represents the phase-firmirovaniya Constitution and the rights of its citizens, says endurance and pride of the people of the UAE.

The vertical red stripe - is the foundationcloth. Its symbolism is that it seemed to cover staff and talks about the extraordinary power and greatness of the citizens proud spirit. Red stripe - is the basis on which to form political and moral principles, firmly stored not only in government buildings, but also the hearts of ordinary people.

Green stripe on the flag of the United Arab Emirates says the greatthe power of Islam and the significance of religion in the life of Emirates citizens. Basics of Islam - are the main pillars on which rests every true believer. This religion replaces them many things, but because it is so large role in the education and formation of the national character. And the green color in the flag symbolizes the youth and power of nature, which in this country is just as strong and powerful as it is harsh.
White flag on the island - a symbol of purity and tolerance. These are the main social values ​​for UAE nationals, their main luggage and the priorities that they have passed down from generation to generation.

Black box - a reference to the mainmaterial wealth of the homeland. Black - the color of the oil, "black gold" reserves of the United Arab Emirates. Found in 20-ies of the last century in this region, oil played a big role in the development and formation of the country, which will create the most economic miracle that the whole world knows today under the name of the United Arab Emirates. Today, their flag state is proudly shows guests the achievements of advanced construction and engineering, forcing to admire and marvel at human capabilities.