Holidays in the UAE in December 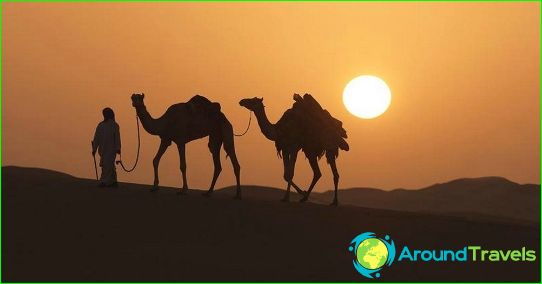 Things to do in United Arab Emirates in December

UAE offers its guests the most diverserecreation. Fans of noisy outdoor activities waiting for a lot of fun at the seaside. For those who prefer a secluded retreat away from civilization and closer to nature, you can go to the islands and in the small towns that are a bit removed and the emirates.

The people of this country do not know what the snow. The temperature in the month of December: air + 28C, + 25C water.

Closer to the night temperature may dropabout 10 degrees, so if you are fond of night walks, we recommend you to bring warm clothes. In December, the rains are possible in the UAE, but they are very rare, no more than twice a month. Another small problem that can interfere with the rest in this country - sandstorms. From the deserts of the strong wind carries the sand right in the city. But it also happens very rarely.

Holidays in the UAE in December

Throughout December the inhabitants of the emirates is carried out in anticipation ofthe long-awaited New Year's holidays. UAE is actively preparing to celebrate the New Year. The entertainment complexes in full swing preparing extensive entertainment and retail outlets at their counters spread a wide variety of products with great discounts.

If you choose to celebrate the New Year in Dubai,then you will certainly become a witness to the New Year fireworks, which will run from the tower Burj Khalifa. This tower is the tallest in the world. Near it also extends and New Year's performance, which involve known and worldwide singing fountains. This action turns into a magical New Year's Eve celebration of water, fire and light. It's just an amazing spectacle that is impossible to convey in words. To look at him, in December in the United Arab Emirates comes more than a million people from all over the world.

If you come to rest in the UAE, then you will be able toits best to see the modern Middle East. Resting in the Emirates in December, you can enjoy clean and warm blue sea and fantastic skyscrapers. It is necessary at least once in life to see with their own eyes.