Home>Articles about the UK>Articles on Edinburgh>The history of Edinburgh. The base development, occurrence of Edinburgh

The history of Edinburgh 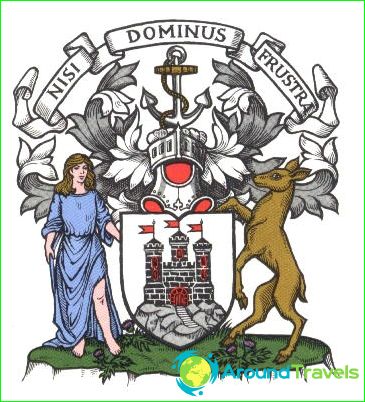 Located on the southern shore of the Firth of Forth to Edinburgh - the capital and second most populous city in Scotland and the UK's largest financial center after London.

The first settlements on the lands of today's Edinburgh existed in the Mesolithic. The excavations have also revealed remains of settlements dating from the late Bronze and Iron ages.

In the 1st century ADWhen Lothian (a historical region in the south-east of Scotland) arrived the Romans, here lived the Celtic tribe of the Britons, which they gave the name votadini. Even after the departure of the Romans in the 5th century BC the territory of modern Lothian and the surrounding regions (the exact border is not known), there Brythonic kingdom gododdin based, most likely the descendants of those very votadini. Around the 6th century gododintsy built a fortress «Din Eidyn» or «Etin», and although its precise location identified was not (the fortress is quite likely could be either on the Castle Rock, and on Mount Arthur, and possibly on the mountain Calton) historians suggest that it was around then and has grown Edinburgh. In 638 the fortress was besieged by the troops of King Oswald of Northumbria and the result of more than three centuries was under the control of the Anglo-Saxons, is in the middle of the 10th century has not passed to Scotland. The "Chronicles of the Picts" fortress referred to as «oppidum Eden».

At the beginning of the 12th century in Scotland as suchcities did not exist. Once in 1124 ascended to the throne, David I, he initiated the foundation of the so-called "royal burgh", which translated literally means "royal burgh" (which, of course, imply a number of special privileges). One of these «royal burgh» and became about 1130 Edinburgh.

Despite repeated claims byEngland and, as a result, protracted war for independence of Scotland, the city gradually grew and developed. After Scotland lost its main trading port of Berwick, most profitable export flow was diverted through Edinburgh and its port Lit. By the mid-15th century, the country firmly entrenched the status of "capital." In the same period begins the construction of defensive fortifications, clearly define the boundaries of the city, which today corresponds to the area, "Old Town". Since the fenced area was relatively small, for the Old Town is characterized by very narrow streets and high-rise buildings. In 1544 as a result of the attack the British city suffered serious damage, but quickly recovered.

In the 16th century Edinburgh was the epicenter of Scottishthe Reformation, and in the 17th century - the center Covenanter (by this time Scotland was already in the so-called "Union of crowns" with England, but still had its own parliament, located in Edinburgh). The first half of the 18th century, Edinburgh is known as a major banking center, as well as one of the most densely populated cities in Europe with appalling insanitary conditions, which greatly contributed to the excessive growth of population in limited space conditions (walls of the 15th century is still strictly protect border cities).

In the second half of the 18th century beginslarge-scale construction of the "New Town", Edinburgh and significantly expands its borders. Soon the city became the center of the Scottish Enlightenment one of the brightest representative of which was a world-renowned economist and philosopher Adam Smith. The 19th century was the "century of industrialization" for Edinburgh, although its rate was significantly lower than in Glasgow. As a result, Glasgow has become the largest city in Scotland and its industrial and commercial center. Edinburgh was the administrative and cultural center ...

Today, Edinburgh - a popular touristcenter that attracts millions of tourists from all over the world. The city is famous for its huge number of historical and architectural monuments, plenty of interesting museums and many cultural events. The famous Edinburgh Festival is the world's largest annual events of its kind.