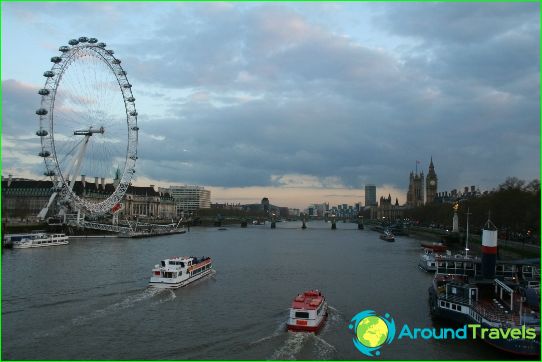 The capital of the UK can be considered quite asolid attraction. This bastion of British tradition is by far one of the most popular tourist destinations in the world. Every year, travelers are flocking here from all corners of the globe, it is not surprising that the city's infrastructure is built in such a way that all the guests here were the most cozy and comfortable.

At the same time London has not lost itsunique charm, so that it can not be confused with any other city. As for entertainment, the various attractions in London are found in great abundance, so that will not be boring to anyone.

This amusement park is definitely worthyto take first place in the list of every tourist. The air is literally saturated with fun and adrenaline, and anyone who dares to look here, this is unlikely to leave the place in good faith.

Attractions in Thorpe Park have a particulardiversity. There is a quite harmless options for the little ones, and terrifying monsters, from one species to which even the desperate daredevils might be treacherous tremor in his knees. The latter include the famous "Samurai"; "Detonator"; "No exit"; "Inferno."

Works Park from 20 March to 9 November, but the exact schedule can be found on the site https://www.thorpepark.com/. The cost of adult and children's ticket is one - 24.99 pounds per day and 30.99 for two.

Another popular tourist attraction. This Ferris wheel is different from the other huge size of cubicles, within which you can move freely, to get a better look at different areas of the city. A full revolution takes about half an hour, so that while driving may well be time to take a picture for memory.

Have the attraction and the site https: // www.londoneye.com/, moreover tickets can be bought right there. In this case, even a 10% discount, and for an additional fee, you can hire a guide and order wine and a variety of refreshments.

Independent travel to the Czech Republic