London Zoo - a photo, price, hours of work. How to get to the zoo in London 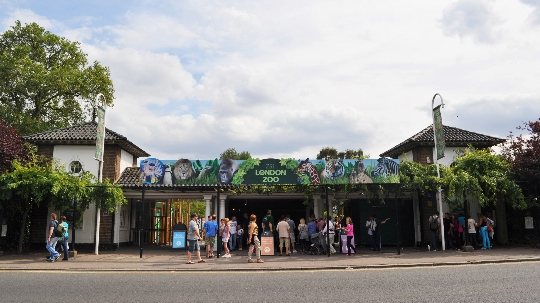 The oldest zoo in the scientific world was in LondonIt was founded in 1828 and initially intended only for research purposes. The first visitors were his enclosure only 20 years later, and since then the zoological park capital of the UK enjoys the same success with inquisitive audience.

That's what the official name of the zooLondon on its website and in all directories. Sometimes it is called Zoo Regents - the name of the park where it is located. The zoo has no state funding and all its splendor created by private donations and contributions of the member organization "Friends." To help, you can park by buying tickets with an additional percentage on donations included in them.

Almost 20 thousand animals representing more than 800species reside in the Zoo Regents. Pride Park - the family of western lowland gorillas, nestled on its own island, and Rothschild giraffes, which you can watch the "face to face" with the high canopy.
In the nearest plans of the administration - opening in spring 2016 of the new building "Earth lion", reminiscent of Gir Forest National Park in India.

Location of the zoo - Regent's Park, London NW1 4RY, United Kingdom
You can get there:

London Zoo is open every day except December 25th. Opening hours of the park:

The box office stops selling tickets an hour earlier. At the same time the gates are closed and the input. Aviary some animals may not be available 30 minutes before the official closing time.
The price of the entrance to the park website - the most profitable. In addition, online booking helps to avoid queues. Prices for the tickets at the ticket office of the park (in British pounds) in about 10% higher, and look like this:

To reaffirm the right to benefits, have to present a document with photo identification.

Children under 16 years must be in the parkaccompanied by an adult. Dogs - is prohibited, and bicycles should be left to a special parking. Not allowed on the park visitors rollerblading and skateboarding.