Home>Articles about the UK>UK Flag photo, history, the value of the state flag colors of Great Britain

Flag of the Great Britain 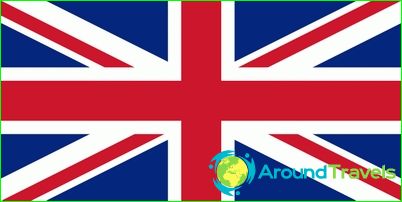 Great Britain is an island nation,located in north-west Europe. Its shores are washed by the Atlantic Ocean and adjacent seas. The official name of the state - the United Kingdom of Great Britain and Northern Ireland. According to the administrative-political structure United Kingdom is divided into four parts:
1. England, with Greater London, six metropolitan counties and 39 counties.
2. Scotland with nine districts of the island.
3. Wales eight counties.
4. Northern Ireland from 26 districts.
UK flag looks like a blue clothrectangular. All flag crossed by two diagonal stripes in red with a white outline. On top of these lines is an even wider Red Cross with the white outline. The cloth has an aspect ratio of 1 to 2.
UK flag has its own name - "UnionFlag ", but more often it is called the" Union Jack "in the original" Union Jack ". It is believed that the word" by Jack "has a tribute to the sea etiquette in the British flag title, because it is so British sailors called the flag rises above the warships.
Flag Kingdom of Great Britain was officiallyadopted in 1801. His goal was to become a symbol of the unification of various regions of the state under a single imperial power. Wide cross in the center of the flag is the cross of St. George. That he is a symbol of England, because St. George is the patron saint of the country. White saltire - a Cross of St. Andrew's - is a symbol of Scotland. In the Scottish flag is a white cross was placed on a blue cloth. With blue color over time turned into blue. The red diagonal cross - the cross of St. Patrick, symbolizing Ireland. He was placed on top of a white diagonal cross.
For the first time in Scotland and England flags appeared in13-14 centuries. Interestingly, in 1063 through the merger of the two kingdoms with the formation of the Union flag on which were depicted two crosses - red and white St. Andrew St. George, located on the blue field. However, in 1649 the royal flag was abolished by Oliver Cromwell. It was restored only after 11 years with the monarchy.
Also interesting is the fact that the "Union Jack" asensign, on the orders of James Charles I was forbidden to raise to the civil courts in the UK. The resolution concerned only ships of the Navy. For violation of the ban should have criminal penalties.
UK flag in its present form received after the accession of Ireland, what happened in 1801. Therefore, the image of the red cross of St. Patrick was added to the flag.