Small towns in the UK 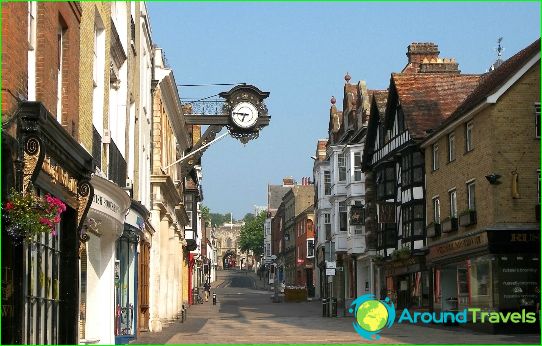 The island location brought into shapeUK special features, allowing to instantly identify the city where you were, no doubt - the Old World, but not uniquely mainland. Distinctive features of small towns in the UK - is a set of magnificent palaces and castles, endless expanse of emerald surroundings, neat old house, ivy, and preserved for centuries lifestyle and schedule. The latter circumstance includes the Five-oh-tuft, and oatmeal for breakfast and always bow to the seller in the village shop as a greeting to each incoming.

Raiders of the Lost

Travelling in small towns in the UKturn for the curious tourists in search of lost history. Each of these settlements is able to tell a lot of interesting legends and tell a lot of historical facts. Part of the city was of great economic and political importance in the past, but because they are preserved unique architectural monuments, fortifications and major cathedrals of world size.

The Hampshire in the south of the country in a couple of dozenkilometers from the English Channel there is a city whose history goes back at least two millennia. His fame reached the farthest corners of England, first in the IX century, when King Alfred the Great proclaimed the capital of Wessex Winchester, and then - in the XVII-XVIII centuries, thanks to one of the country's largest local trade fairs.
Capital status was in XIV-XV centuries and WelshKaernarvon. Its fortress was intended to protect Manaysky Strait from invading enemy. Today, the former capital of the North Wales attracts tourists with magnificent old castle, listed in the UNESCO list of World Heritage of Humanity.

Stonehenge is not a single

The famous megalithic complex Stonehenge- Only the most promoted among these tourist sites. Close to many small towns like the UK, there are cromlechs, and one of them - the circle of the Twelve Apostles - Located in Dumfries in the south of Scotland. Besides the rich historical and architectural heritage of the city is impressive luxury northern landscapes, and where there are blue lakes and green meadows, and rocky cliffs.