Articles about Kyiv
by aroundtravels 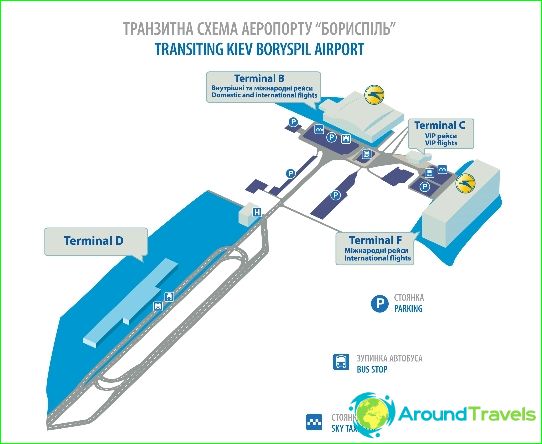 Today in Borispol airportconsidered the largest Ukrainian airport in terms of passenger transportation volumes. In addition, in Ukraine, this is the only airport that serves the intercontinental flights.
The airport is located about thirty kilometers from Kiev, and near the city of Boryspil. five terminals disposed inside the airport. They are not numbered, but are designated by Latin letters.
Terminal A serves flights with flights withincountries. Terminal B is considered the main, it is focused on service, not only international but also domestic flights. Terminal C serves VIP clients, but above all, there are serviced private aircraft belonging to small aircraft. Terminal F is created in order to serve only international flights, and finally, the terminal D is a cargo sector. There are no usual "sleeve" between the terminals. If you want to go from the terminal to the terminal, you must use the main entrance. You can also use the shuttle bus service between the terminals.
To travel was much more convenient forThey are special services. Each of the terminals operated wi-fi, free acting. If there is already talk about the shortcomings of the airport, it can be noted except that the lack of trains, walking at high speeds, which is connected to the airport and the capital of Ukraine.
The airport of Kiev can be reached by means ofbus. For example, several flights a day to the airport follow the train station. At the air terminal bus stop near Terminal B and Terminal F. These buses run throughout the day and are sent at the beginning of each hour. One trip costs about twenty-hryvnia (or seventy-five rubles). Tickets can be purchased directly from the driver, as well as at the box office of the company "Kiy Avia".
With regard to the Kiev subway, the nearestStation to Borispol airport - Boryspil. Metro is working with six in the morning until midnight. From budget types of movement can still use the fixed-route taxis - up to certain places in the city will have to go with transfers, it is enough troublesome.