The history of the city. The base development, occurrence of Lviv 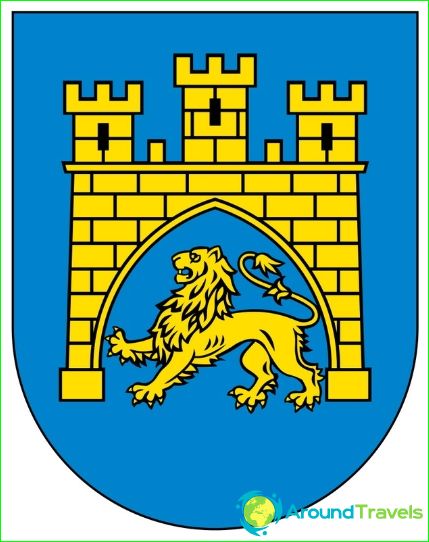 Lions - a major cultural and scientific center of Ukraine, as well as one of the most beautiful and interesting cities in Europe.

At the end of the 12th century, the lands of modern Lviv,its surroundings were part of the Galicia-Volyn principality. The first written mention of the city are in the Galicia-Volyn chronicle and date back to 1256.. Since that time and maintained the official calendar of the city.

It is believed that Lviv was founded by DanielGalitsky (Prince of Galich and Volyn, Grand Prince of Kiev and the first king of Russia), to appreciate the landscapes of these places that are ideal for creating a new well fortified settlement. In his famous chronicle "Three Lions" (lat. Leopolis triplex) poet, historian and Mayor of Lviv Bartholomew Zimorovich, devoted an impressive part of his life to studying the history of the beloved city, he writes: "Seeing at the very edge of their possessions profitable militarily mountain, protected from the bottom like ring forested valleys and very steep, which can hold back the enemy, he immediately ordered to build a fortress here and decided to move here a princely residence. " City received its name in honor of his son Daniel Galitsky - Leo Daniilovich. In 1272 Lviv became the capital of Galicia-Volyn principality.

In 1349, weakened by infighting and frequentattacks Tatars Lviv is under the control of Poland, and in 1356 the Polish king Casimir III the Great grants the town the Magdeburg Law. Lions begin to grow rapidly and develop, which greatly contributes to the extremely successful its location at the crossroads of important trade routes. Finally, as for the Lviv cemented its status as one of the largest shopping centers in Eastern Europe, receiving in 1379 the town the right to have their own warehouses. Being a powerful outpost of Poland in the southeast, a thriving Lions attracted more and more new immigrants soon became a multinational city, whose inhabitants practiced a variety of religions. Economic growth also contributed to the development of the city as a cultural and scientific center.

By the end of the 15th century, the increasing TurkishExpansion to the West actually blocked all trade routes, thereby causing heavy damage to the economy of Lviv. City in poverty, surviving, perhaps one of the most difficult periods in its history. The last straw was a terrible fire in 1527, which almost completely destroyed the Gothic Lions. However, residents do not have thrown the city, being able not only to rebuild it (though, in the Renaissance style), but also to revive the former glory of the merchant. Previously well-being of local merchants mainly based on trade in goods transiting through the Lions, but now the emphasis has been placed on local products - fish, wax, furs, etc. Soon the river flowed and foreign goods. Life on Lviv Market again scored key. Actively developed in this period, in Lviv and Crafts.

Not surprisingly, a thriving Lions, knownas a major trade and craft center far beyond its borders, it is of some interest for the various conquerors. In the 17th century the city experienced many sieges (Cossacks, Swedes, Turks, Tatars, etc.), but no matter what stood. Yet already in 1704 fundamentally weakened Lions for the first time in nearly 400 years, was captured by the army of Swedish King Karl XII and looted. Of course, it could not affect the welfare of the city, and a Lvov gradually fell into disrepair. Do not contributed to the revival of the city and the general crisis that prevailed in the realm of the Commonwealth.

Lviv was under the full control of Polandup to 1772 (with the exception of a short period in 1370-1387gg., when the city was ruled Hungarian governors). In 1772, after the first partition of Poland Lviv became part of the Austrian Empire (since 1867 Austria-Hungarian Empire) became the capital of one of its provinces - the Kingdom of Galicia and Lodomeria. During the rule of the Austrians, a series of administrative and economic reforms, demolished the old city walls, which allowed to significantly expand its borders, and established telephone connection, built the railway, electrified the streets, and more. Significant changes undergone and cultural life of the city - built two theaters, restored Lviv University, open real (trade) School, Technical Academy and a private library Ossoliński, developing (today Lviv Scientific Library named after V. Stefanik.)
elk publishing ...

After the collapse in 1918, the Austro-HungarianEmpire Lions for some time has become a part of the West Ukrainian People's Republic, which led to an armed military conflict, went down in history as the Polish-Ukrainian war, which unfolded against the backdrop of the so-called Polish-Soviet War and the Polish front. As a result of the signing of the Treaty of Riga Lions was back in the Polish authorities, under the control of which he remained until 1939 as the capital of the province of Lviv.

September 1 with the invasion of Poland, the SecondWorld War. In accordance with a secret additional protocol to the Treaty of Non-Aggression between Germany and the USSR (Molotov-Ribbentrop Pact), Lviv was part of the scope of the latter's interests. However, the September 12, 1939 the Wehrmacht began the siege of the city. After a conflict has been resolved and the German troops withdrew from the city. On September 21, the Soviet command began negotiations with the Poles, which resulted in the reunion of Western Ukrainian lands to the Ukrainian Soviet Socialist Republic within the USSR. During the reunion was followed by massive repression and deportation to Siberia of Ukrainians and Poles.

In 1941, during the offensive of the German armySoviet forces left the Lions, but before retreating NKVD extrajudicially executed in the prisons of Lviv More than 2,500 Ukrainians, Poles and Jews (the majority of prisoners are representatives of the local intelligentsia). However, the most sad page in the history of the German occupation of the city in 1941-1944. became "The murder of Lviv professors," "Holocaust in Lviv" and "Lviv ghetto". Lvov was liberated by Soviet troops in July 1944 and became the administrative center of the Lviv region as a part of the USSR, as well as an important center for the revival of the Ukrainian nation.

In 1991, after the collapse of the Soviet Union it is the administrative center of Lviv, Lviv region, but as a part of independent Ukraine.