Culture of Ukraine: the tradition, especially 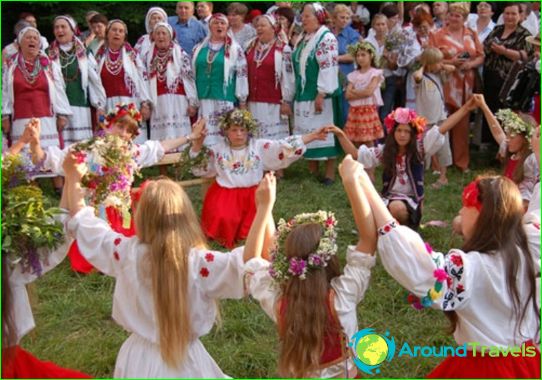 One of the most important historical stages inthe formation of Ukrainian culture was the acceptance of the Christian religion in the tenth century. It is the preservation of folk traditions owe modern Ukrainians, because in many respects because of them have been successfully formed and literature, music and painting, and even cooking,

The traditions of Kievan Rus

The main creator of culture of Ukraine - its people. Cossacks, peasants and artisans for centuries created their own folklore and preserved folk and national traditions. He was given a special color legends and songs, ballads and dances. The importance of popular folk had thought, developing arts and crafts. Fundamentals of Culture of Ukraine were laid in the times of Kievan Rus, a special recovery and development she received in the middle of the XIX century.

The adoption of Christianity gave rise to widespreadwriting development. So began to appear the first monuments of ancient literature written in Old Church Slavonic. The traditions of ancient authors thoughts and stories picked up by writers Shevchenko and Gogol, to create a real literary culture samples Ukraine for many hundreds of years. Their works are included in the school curriculum, and the rows of them learn by heart, as examples of remarkable style.
No less delight cause the productUkrainian architects who built the temples and cathedrals, in glorifying the centuries of its creators. List of architecture in the country, worth visiting, is quite impressive:

All architectural buildings worthy of attention and as a UNESCO World Heritage Site, and how unique and wonderful buildings, carefully preserved the Ukrainian people.

In the cultural life of the country play an important roleNumerous festivals, most of which have roots stretching back to the century. They are all somehow related to the agricultural calendar and confined to certain agricultural developments - the end of the sowing, beginning of the harvest, the completion harvest. Celebrated Ukrainians and the change of seasons, and the onset of the next season. Special festivities organized on Shrove Tuesday and Easter, Christmas and New Year. And today, many festivals and days of cities relate to important dates in the national calendar.

Holidays in Spain in August: prices and ...