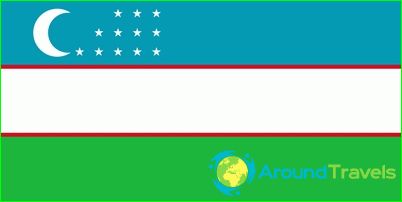 The Republic of Uzbekistan shall have its statesymbols. Its flag consists of three equal bands. This green stripe, white and blue. The edges of the white strip marked with red trim, width of the red frame is 1/50 of the total width of the flag and 1/100 of the length. On the blue band look great white crescent and five-pointed white star in the amount of 12 pieces.

Like the rest of the symbolism of Uzbekistan flagvividly reflects national and cultural differences of the people, it embodies the natural features of the country. The upper band, made in a sky-blue color, is the personification of the peaceful blue sky and water. It is the sky and the water, in the opinion of the people - the source of all life on Earth.

The average white stripe symbolizes peace and purity,transparency of thoughts and right thoughts. Due to the difficulties that the State had to overcome on their way to independence, the white color is more pure and sincere desire to light the way.

The lower green band is the personificationthe grace of nature, symbol of fertility and new life. Green is the symbol of Islam. Its presence on the flag is especially true in the modern world in terms of the popular movement to protect the environment.

Strips of red color that serve as framingwhite stripes are a symbol of vitality, which are inherent in any living organism. It is a symbol of life, it's connecting thread between the high pure thoughts, real earthly affairs and the eternal sky. People sometimes Uzbekistan tokuet these two bands as "blood vessels", the supply of land republic. Under these vessels they mean the Amu Darya and Syr Darya.

Traditionally, Uzbekistan, crescent -It is the embodiment of a new young independent republic. And of course, it is impossible to imagine this flag without stars. Stars always and everywhere symbolized pure peaceful sky. Stars 12 is also symbolic. 12 months, 12 constellations of the zodiac, 12 regions of Uzbekistan, in the 12 years old boy becomes a man.

Flag of the Republic of Uzbekistan adopted in 1991 andIt is considered a national symbol of the past, present and future. It stands proudly on a par with other flags of Independent States at the United Nations headquarters.

Approved dimensions 250h125 see the flag. He will present on postage stamps of the Republic.