The population of Uzbekistan 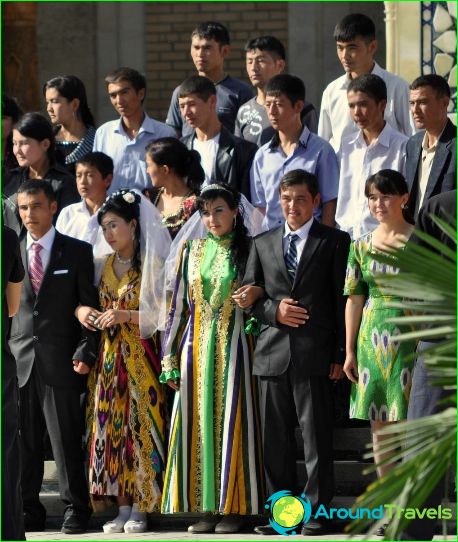 Multinational Uzbekistan due to the factArmenians, Russian, Ukrainians and Belarusians in the years of World War II were evacuated from here, and the Tatars, Chechens, Koreans, on the contrary, was exiled here in the period of Stalin's repressions.
On average 1 km2 is home to 75 people, butdesert regions of the Republic there is a low population density, for example, in Navoi region on the 1 km2 is home to 7 people, and in Karakalpakstan - 9 people.
Official language - Uzbek, but the international language is Russian.
Big cities: Tashkent, Samarkand, Namangan, Andijan, Fergana, Bukhara, Nukus.
Most of the residents of Uzbekistan (88%) are Muslims, and the rest - Orthodox Christianity.

Men on average live to 61 years, and women - 68 years.
But compared to the other years, todayday, these figures have grown and continue to grow thanks to the reforms in the healthcare system - adopted measures have substantially increased the level of medical care for people and improve their quality of life. In addition, the country has established a unified system of emergency medical care, open specialized republican medical centers, which are equipped with modern facilities.
The main causes of death of people in Uzbekistan are cardiovascular, infectious diseases, diseases of the respiratory system, malignant neoplasms.

Traditions and customs of the inhabitants of Uzbekistan

Uzbekistan family usually large and compriseof living together under one roof several generations. But relations within the family are based on the principle of strict hierarchy and respect for elders (households obey head of the family).
A great influence on the lives of Uzbeks imposesreligion: they are 5 times daily namaz; strict fasting during Ramadan (during the month they do not eat or drink until sunset); deduct part of their earnings to the poor or putting them in charitable affairs; celebrate Muslim holidays, including Eid (Feast of Sacrifice).
If we talk about the rituals related to the children's birth, marriage, cooking and other things, they are the result of interlacing of Islamic rites and magical practices.
Of great importance in the life of the Uzbeks took teaceremony: tea - the main drink of the country, must be brewed and bottled in small bowls guests landlord (man). The exhibit more respect for the guest, the less he poured tea. This is done so that he often turned to the host or hostess of the additive (a manifestation of respect for the house). And the intruders poured tea to the brim.