Home>Articles about Uzbekistan>Rivers of Uzbekistan - a photo, a list description 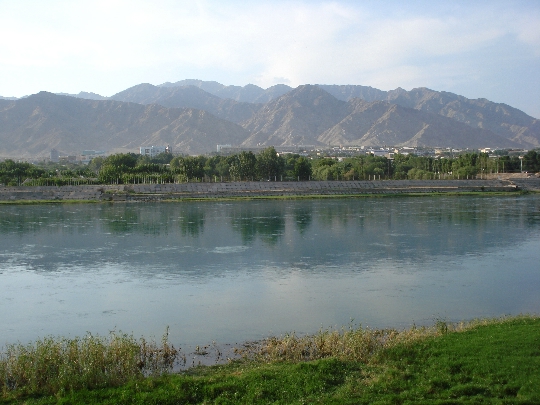 Uzbekistan - one of the Central Asian states,and this means that the rivers are playing a major role in the development of entire nations. The main rivers of Uzbekistan - the Amu Darya and Syr Darya rivers, many of the Millennium used to irrigate the land, and fishing as the main transport routes.

Amu Darya passes through the territory of severalstates - Tajikistan, Afghanistan, Uzbekistan, Turkmenistan - and then ends its way, flowing into the Aral Sea water. The most full-flowing river across Central Asia has a length of 1400 kilometers.

The name of the river is made up by two words "Amu" (from the name of the ancient city) and "darё" - river. Originally called the Amu Darya River Vakhsh, a Zoroastrian goddess of water and fertility.

Once the river was navigable for the most part, butToday the ships are found only near the city of Turkmenabat. The lower reaches of the river are rich in fish. But the main purpose of the modern Amu Darya - irrigation fields. At the same time the water of the river flow is used so actively that the shrinking Aral Sea gets almost nothing.

The total length of the Syr Darya - 2200 kilometers,making it the longest river in the region. Syr runs across four countries: Kyrgyzstan, Uzbekistan, Tajikistan, Kazakhstan. The source of the river - the Ferghana Valley, where the confluence of two rivers: Naryn and Kara Darya. That they give rise to the Syr Darya.

Meandering riverbed, especially in the middle and lower reaches. There are many water-meadows, which are widely used in agriculture for growing rice and melons.

Zarafshan (second name - Zarafshan) muchless than the Syrdarya and Amudarya, but the historical significance is not inferior to their "sisters." The source of the river - Zeravshan mountains (Tajikistan). Approximately half of the river runs through the territory of Tajikistan, and the second - in Uzbekistan.

Verbatim name of Zarafshan in Persian sounds like "Gold". The ancient Greeks called it Politimet or "mnogochtimaya", and travelers from China - We have, which means "revered".

It is on the banks of the river grew the greatest such cities as Samarkand and Bukhara. In addition, once there was an ancient city Sarazm. Its ruins included in UNESCO list.

The total length of the river - 887 km. In the upper reaches it receives water from many tributaries, and the bottom has a huge set of branch ducts, takes almost 85% of the water flow for household needs.

How to fly from Magadan to Moscow? Time ...