The traditions of Uzbekistan 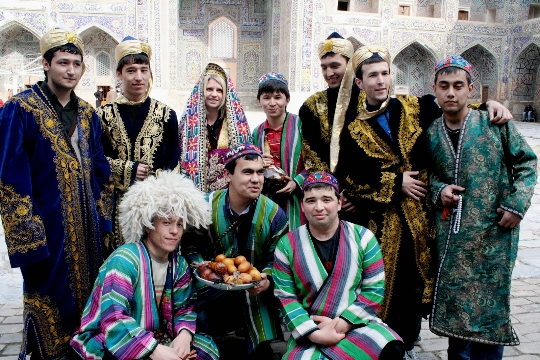 This Central Asian state is famous for itsold traditions and customs, many of which have come into modern life from the distant Middle Ages. Holidays Uzbeks and ethnic cuisine, wedding ceremonies and religious rituals, all of this is the concept of culture and traditions of Uzbekistan, familiarity with which is of great interest for foreign tourists.

That's how long plaits, according to children'swriter Agnes Barto, braided on the head of the Uzbek girl. Many braids - a national hairstyle that adorn the top skullcap. Bright and colorful headdress handmade detail not only clothes, but also a kind of traditional in Uzbekistan arts and crafts.
Skullcap worn by men and women, children andthe elderly, and their form and decoration differ enough variety. Producing skullcap for the child, the mother, according to tradition, it is decorated with a large number of amulets designed to protect the baby from the evil eye. Women's hats sparkle of fine embroidered silk or silver cantle.
Tradition traced in Uzbekistanornaments applied to the skullcap. In the elderly, it can be embroidered with birds as symbols of wisdom, and the bride - rose branches, emphasizes the beauty of the girl.

Public relations in the country are regulatedthe laws of the communities in the territory of the state, there are several thousand. Mahalla is called a community, serves as a center of worship, observance of family relations and even meeting the secular holidays. Traditions of Uzbekistan stored in the religious centers in mosques that were built in the community.
Mahalla members help each other in solvingdomestic issues, and the main instrument for this assistance is a ritual "hashar". Its meaning lies in the fact that any large business community, participants spend together. With the help of neighbors, building houses, playing weddings, landscaped courtyards and streets. Modern mahalla - a kind of partnership that brings together neighbors and friends.