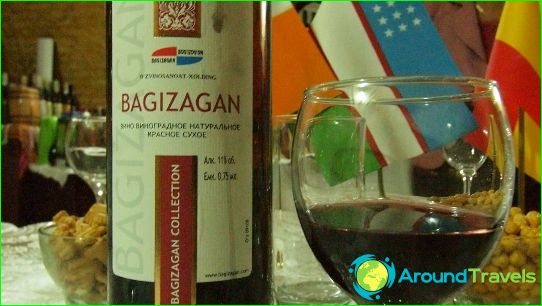 In viticulture always sunny UzbekistanIt was one of the main sectors of the economy, along with the cultivation of cotton and melons. Samarkand winery - the patriarch of the Central Asian wine, and of the most ancient varieties of grapes here Tayfi get the best wines of Uzbekistan.

The Uzbek people passes from mouth to mouth the ancientlegend. It is near the modern Samarkand grew once the vine, whose pink berries gave the world the wine of amazing power. During Soviet times, Uzbekistan wine is worthy of competing with the Crimean and even Georgian. Local blackstrap not lie on the shelves of grocery stores and dry wines were particularly popular with the beautiful half of the buyers. They contain more sugar than in beverages other countries, because a huge number of Uzbek sun allowing the fruit to ripen to perfect conditional parameters.

Uzbek wines produced throughout the country, but depending on the region of the sugar content, strength and other parameters may vary significantly:

In general, the range of or producedother terrain significantly affects winemaking region of the area and its associated climatic characteristics and weather conditions. The vineyards in the valleys grow in conditions of heat, but because of their fetuses get dessert and fortified wines. Mountain vine gives a table wine and the material for the manufacture of sparkling products.

Uzbek wines have been highly appreciated by manyinternational exhibitions. Gold and silver cups brought home Samarkand winemakers from Antwerp and Paris before the revolution. Today, some decline observed in the production of the wine country, but a trip to Uzbekistan, tourists have a good chance to taste the drinks, do not fall on the shelves of the world's capitals.