Home>Articles about Vatican>Vatican Flag photo, history, the value of the state flag colors of the Vatican

Vatican Flag photo, history, the value of the state flag colors of the Vatican 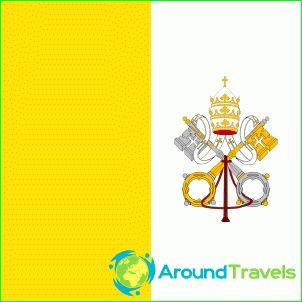 Flag dwarf enclave-state,located within the territory of the Italian capital, it was adopted June 7, 1929. It was then signed Lateran Treaty and created the Vatican State - independent state of the Holy See.

Description and proportions of the flag of the Vatican

Vatican flag - it is a rare occasion whenthe cloth has a rectangular shape whose sides are equal. Square Vatican flag field is divided vertically into two equal parts. Left, closest to the shaft portion of the cloth is made of golden-yellow color. The opposite of the flag - white.
On the white field of the flag of the Vatican emblem image taken by the Vatican, which is applied at the same distance from the upper and lower edges of the cloth.
Vatican Coat of arms on the flag - it is a statea symbol which represents the crossed at right angles keys. One of them is made with gold paint with silver accents, the other, on the contrary, silver with gold elements.
Symbols indicate the keys to Paradise and Rome. Above them is the papal tiara - triple crown, which is crowned by a cross. The flag of the Vatican tiara made of gold, and down from her cascade down two white ribbons with golden crosses.
Tiara has always served as a symbol of papalrule. Finally, its shape is formed at the beginning of the XIV century, and three crown tiara marked on the Vatican flag - a symbol of the Holy Trinity and the Church of the three statuses.

Modern State of the Vatican flagcreated in the image of its predecessor. Flag of the Papal States came in 1808, and served as the official symbol of theocratic state, which extended in Central and Northern Italy, and was part of the Italian kingdom. Headed region Pope.
Flag of the Papal States was a squarepanel divided vertically into two parts equal to each other. The left side of the flag at the base had a golden-yellow color, and the second was pure white. The flag served as the official symbol until 1870, when, and the Papal States ceased to exist.
The next few decades, the status of the HolySee remained unsolved until 1929 were not signed Lateran Treaty, created the Vatican City State to the new flag. It was he who today adorns the flagpoles of the country, an area of ​​only 44 hectares.

Christmas in Sweden, traditions, photo. As the ...