Home>Articles about Venezuela>Venezuela Flag photo, history, the value of the state flag colors of Venezuela

Venezuela Flag photo, history, the value of the state flag colors of Venezuela 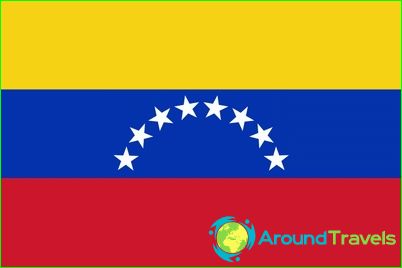 One of the most important state symbols Bolivarian Republic of Venezuela is its flag, adopted in 2006.

Description and proportions of the flag of Venezuela

Flag of Venezuela has a rectangular shape. Its width refers to the length in the ratio 2: 3, and the color scheme is traditional for many of today's Latin America. The flag is a horizontal tricolor, whose band width equal area. The lowest band has a bright red color, medium - dark blue, and the upper - rich yellow color. The blue strip center eight white stars placed, arranged in a semicircle. At the top of the flag on a yellow box at the shaft applied Venezuelan coat of arms.

The history of the Venezuelan flag

The country was more than three centuries in colonialDepending on Spain. Liberation movement first emerged in the late XVIII century, and even then the supporters of independence were under the flag, whose colors symbolized the unity of the people of various races in the struggle for sovereignty.
In 1806 the leader of the liberation movementSouth American continent Francisco de Miranda created the flag which three stripes - red, blue and yellow - symbolize the bloody regime of the Spanish colonizers, the Atlantic Ocean, lies between Spain and America, and gold and other riches of his native land. Raised above the ship "Leander", went to the continent from the United States, tricolor Patriots symbolized the dream of a free-rich continent, separated from the bloody conquering oceans.
Flag waving and the army of Simon Bolivar,which failed at the beginning of the XIX century to liberate Venezuela from the invaders. The country gained its long-awaited independence. That's when the flag banner appeared, and white stars. Initially, there were seven in the number of historical provinces of Venezuela. Stars lit in honor of Margarita, Cumana, Caracas, Barcelona, ​​Merida, Barinas and Trujillo and arranged in a circle with a single to center.
In 2006, President Hugo Chavez has proposedplace on the Venezuelan flag of eight stars, marking the merits of Simon Bolivar in the liberation of the country from the Spanish colonizers. Today it is called the star of Bolivar and the Venezuelan flag decorates with the others. The eighth star and carries a different meaning: it reminds us of the territory, in the contested state of Guyana.

Christmas in Greece, traditions, photo. As the ...