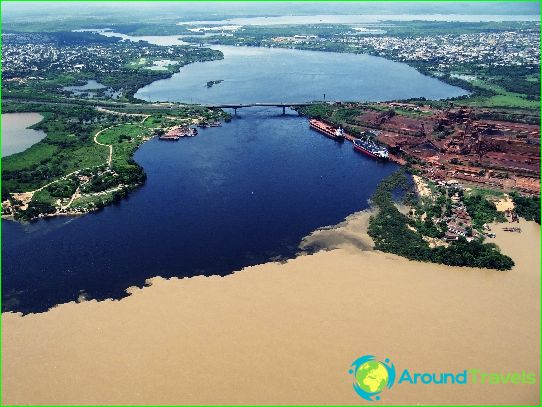 Venezuela River in the majority (more than half of the country's rivers) replenish the water of the Orinoco River - one of the largest waterways throughout Latin America.

Apure flows into the countries in south-easternthe country and is a left tributary of the Orinoco. The total length of the course - 1580 kilometers. Source Apure is located in the Cordillera de Mérida (town Uribante). Mouth - River Orinoco.

River abounding enough for her typicalsevere floods. This period is from May to November (rainy season). By the end of the season the water level in the river can even rise above the permissible 12 meters.

The bed of the river navigable for 1,400 km in the period of maximum water. After the recession ships can rise only to the city of San Fernando de Apure.

The river passes through the territory of Colombia and Venezuelaand it is also one of the tributaries of the Orinoco. The total length of the channel - 1497 km (of which 630 km are navigable). Guaviare begins at the confluence of two rivers - Aryari and guayabera. The river receives several tributaries, among which the most important is the Inirida.

Caroni - one of Venezuela's rivers, water flows into the lower Orinoco, with a total length of 920 kilometers of the riverbed. The river is navigable 100 kilometers upstream from the confluence.

The source of the river is located in the territory of mountainsSierra Pakarayma. The channel passes through the lands of the Guiana Highlands, forming downstream of the rapids and beautiful waterfalls. The largest and most beautiful waterfall, which is called the "Lower Falls" is located near the mouth (just eight kilometers from the confluence of the place). The height of this natural attraction is 40 meters.

Meta - river passing through the countries of Colombia and Venezuela (left tributary of the Orinoco). The bottom of the course assumes the role of a natural border between these countries.

The total length of the course, including the mouth, - 1000kilometers. The shipping of the meta - about 785 kilometers. The source of the river is located in the Eastern Cordillera (eastern slopes). Navigable river is almost always (for eight months), starting from the village of Maral and to the confluence.

Zulia - river in Colombia and Venezuela, the influxCatatumbo. Source Zulia is located in Colombia (Santander department) in the eastern part of the Andes (altitude 3500 meters above sea level). Place confluence - the water of the river Catatumbo (Venezuela, Zulia State).

The length of the river - 310 km. The main tributaries are: Grita; Tachira; Oropa; Peralonso; Medio; Tarr and others. For typical river frequently floods.

Coat of arms of Luxembourg: the photo, the value description