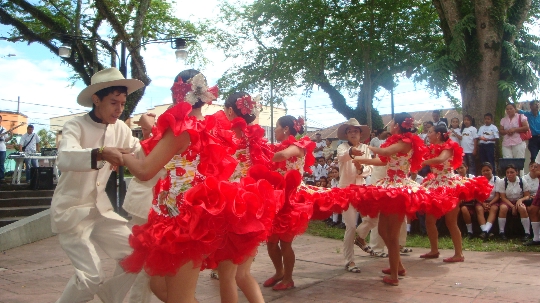 The Bolivarian Republic of Venezuela becomesdestination among Russian tourists is not too often. The reason for this, and long-haul flight, and not too cheap. However, natural and historical sites, and Venezuela traditions may seem interesting and meaningful to those travelers who are not afraid to go to South America.

Mapoyo people living in these parts for a long time. Once the Indians of this tribe inhabited the endless savannah state of Bolivar between the rivers and the Caño Vilyakoa Caripe. Representatives mapoyo had no written language, and for centuries their culture and customs handed down from generation to generation by means of oral tradition.
Unwritten dialect became a causeoriginal Venezuelan tradition. Her keepers tell ancient legends and stories of daily activities for young people, thus preserving the cultural heritage of the tribe and helping to strengthen the self-awareness.
Modern Venezuela is developing dynamically and alla larger percentage of the population goes to the city. It becomes the cause of the extinction of the villages and places of traditional habitat Indians mapoyo rapidly emptying. To prevent the extinction of the old rite, the UNESCO organization brought it oral tradition and Venezuelan tribe mapoyo in the list of World Intangible Heritage.

Home religion professed by localresidents - Catholicism. Compliance with standards of Christian behavior - a tradition in Venezuela, but because the church is here the main cultural, religious, political and social center. At the service decided to come with the whole family, with a release of the usually is an important event. Venezuelans certainly dress up, going to the temple, and there are flowers and sweets.
The family is no less important in the life of residentrepublic. Usually Venezuelans born many children who spend a lot of time not only the mother but also a strong half. Marriages among residents of the country are often mixed, and in any family there, and white, and Latino and Negro and Creole blood.

In the rhythm of carnival

As elsewhere in Latin America, in the traditionVenezuela - the carnival on the eve of Lent. It is celebrated in every village of the country, and even the inhabitants of a small village arrange festive processions and colorful dance marathons.