Articles about Nha Trang
by Dominic 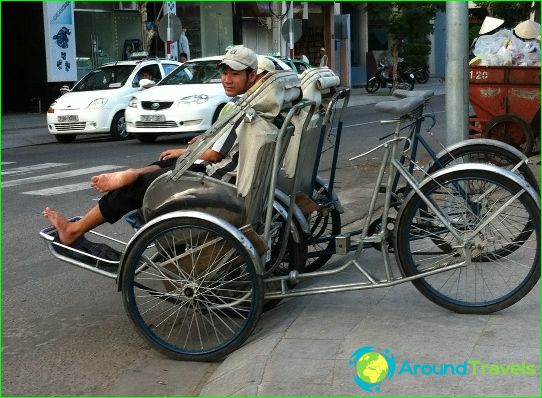 In Nha Trang no metro and trams, but for those still available are four types of public transport.

In Nha Trang is very much a taxi. Each car is equipped with counters, but it should be prepared for the fact that higher prices for travel in the 2 - 2.5 times, compared with the Russian. The fare depends on the vehicle class. If you want to save on travel, you should prefer a smaller car. Bear in mind that landing in a taxi and the first hundred meters worth 10,000 VND, accounting for 15 rubles.

After that, the cost of growth depends on whatthe car you have chosen, but the cost is usually 14 - 17 thousand VND, and the price begins to decline only after thirty kilometers. Be prepared for the fact that many drivers increase the cost of the trip, as the counters taken to tighten up. As a result, costs can be significant, but the taxi is one of the most popular means of public transport.

Tickets for all buses is the same and amounts to 5,000 dong.

This transport can be found in mostintersections, pedestrian crossings, which are located in the tourist area. Be sure to negotiate the price in advance and try to bargain, because the cost can be inflated twice.

If you decide to ride a trishaw, pricetrip should be negotiated in advance and try to bargain. However, due to the cost may still grow substantially. Be prepared for the fact that the trishaw ride very slowly. In this regard, the traffic in Nha Trang can be regarded only as an exotic in order to have fun.

The capital of Georgia map, photo. What is the capital city in ...

Vacations in Cuba in June: prices and ...