Home>Articles about Yemen>Flag of Yemen: photo, history, the value of the state flag colors of Yemen

Flag of Yemen: photo, history, the value of the state flag colors of Yemen

Articles about Yemen
by aroundtravels 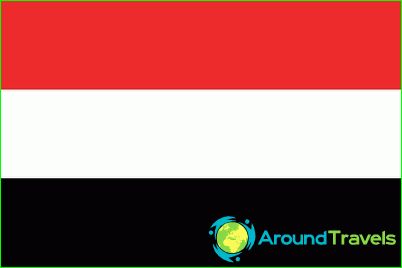 In May 1990, North and South Yemen were unified. On the day, when it was officially signed a contract that secures an event legally, there was also a national flag of the Republic of Yemen.

Description and proportions of the flag of Yemen

The rectangular shape of the flag of Yemen FlagIt is traditional for the vast majority of independent world powers. The ratio of length and width can be expressed as a proportion of 3: 2. Flag of Yemen - a classic tricolor field is divided horizontally into three equal parts of width. The upper band of Yemen flag painted in bright red color symbolizes the blood of heroes shed in the battle for sovereignty and unification of the country. The central field of the Yemeni flag white. It recalls the importance of peace in the world and a desire to the people of Yemen to prosperity and mutually beneficial partnership with its neighbors. The lower band of Yemen flag black. This color symbolizes the importance of the Prophet Muhammad and his teachings for the people of the state.

The history of the flag of Yemen

The first Yemeni flag was adopted in 1927. It was a red flag with a picture drawn on it scimitars and five stars, made in white. Then the country was called Mutawakkilite Kingdom of Yemen, which lasted until 1962. Then the state flag was canceled and not replaced by a panel of the Federation of South Arabia. It was a rectangle with three equal stripes of black, bright green and blue colors arranged in sequence from top to bottom. Between the major bands ran two yellow narrower field. Centre of the flag of Yemen held a crescent, facing away from the shaft to the free edge, and the five-pointed star, applied in white.
North Yemen until 1990 was called the Yemen Arab Republic and used as a flag tricolor red-white-black with a green five-pointed star in the middle.
Flag of Yemen today and is used in the logostate. The coat of arms shows a golden eagle with spread wings who holds in his paws a tape with the name of the country. On either side of the birds are located the flags of Yemen and on her breast - a shield with a stylized image of coffee tree fruits. That Yemen is considered the birthplace of this fragrant drink and loved by millions. Gold Line on the border of the coffee tree and sea waves on the emblem symbolizes the Marib dam in the ancient state of Sabah on the territory of modern Yemen.

Children's camps in Penza in the summer. Children's ...