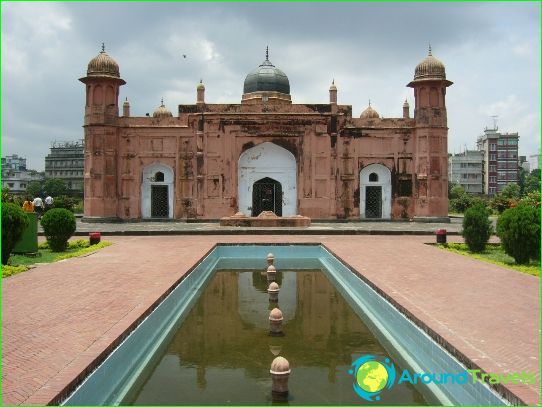 The capital of Bangladesh - Dhaka - not just the heartcountry, but also the largest city in the country. There are two versions of the origin of its name. The first reports that the so called town fertility goddess Durga. According to another version, the name of his city was due to tree Dhaka.

The most popular form of transport capital - bicycles and auto rickshaws. That's especially convenient to travel through the streets of the capital.

Church of the Holy Resurrection

Among the attractions of the city on the listfirst place is the Holy Resurrection Church. The temple belongs to the local Armenian diaspora. However, since the Armenians in the city have very little, so the church at the moment belongs to the invalid.

church design will impress any tourist. The area of ​​the temple - about one hectare, and the courtyard is decorated with a small memorial. The temple itself consists of two parts: upper and lower. The upper part is a room with a balcony and columns, and placed in the bottom of the wooden benches where sat the congregation during the service.

From the beginning, the church bells adorned with a clock, but it was later destroyed by an earthquake. After the restoration of the building hours were lost.

This is a relatively new attraction of the capital. The mosque was built in 1960. But, nevertheless, loved and attendance of the guests of the city, because it has a wonderful view.

Its creator - A. Tariani - during the construction used light stone with black accents. It is he who gives a monument of architecture beauty and grandeur. Another detail, which gives the uniqueness of the mosque - an artificial pond, located directly in front of the entrance.

Do not deny yourself the pleasurestroll through the National Zoo. Founded in 1964, it is still ten years remained small menagerie. It was only after moving to the current location became the most visited place.

Zoo has 2150 animals of different species. Here is the largest monkey, where representatives of more than 200 species of these amazing primates. Be sure to check out the butterfly garden, where you can find a completely unique insects. Dimensions of individual butterflies reach the size of the palm of an adult male.

The monastery, built in the VIII century, belongsBuddhists. The building has the form of a rectangle, the perimeter of which are located on the monks' cells. The walls of the monastery is decorated with bas-reliefs. Today, the archaeological excavations carried out in its territory, and to get acquainted with the found objects offer tourists in the museums of the capital.

Airport Sevastopol: diagram photo. How to get ...

Power in Kyrgyzstan. Prices for food in ...