Home>Articles about Bangladesh>Demographics of Bangladesh. The population in Bangladesh: features, weight, composition

Demographics of Bangladesh. The population in Bangladesh: features, weight, composition 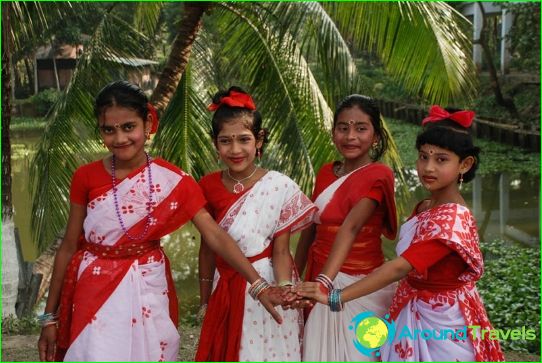 The population of Bangladesh is more than 157 million people.

The first people who inhabited the area 4,000 years ago, Bengal were Tibeto-Birman, Dravidians and avstroaziaty. Today, the overwhelming majority of the population are Bengalis.

Bihari, for the most part, concentrated inareas of Dhaka and Narayangadzha, Chakma - Karnaphuli River in the valley of the river, mogha - in Gorny Chittagong, Garo and Dal - in the north Mymensingh and Sylhet, tipra, ISI, tanchaung, kami, bong - within the districts of Chittagong and Chittagong Mountain.

In the 1st quarter.km is home to 873 people, but the highest density of population is characteristic of suburban areas of Chittagong, Dhaka, Khulna (1 sq km is home to 1550 people), and the least populated mountains (Mountain District Chittagong) - here on 1 square kilometer lives of 78 people.

On average, both male and female population of the country lives up to 68 years.

Pretty poor performance due to the fact thatBangladesh on health deducted very few resources, widespread poverty, a shortage of doctors and nurses. Despite the fact that over the last 10 years of the country managed to increase the average life expectancy (before it reached, only 61 years), reduce maternal and child mortality by 70%, there are observed problems such as persistent malnutrition and the spread of tuberculosis (due to poverty urban population moved to the slum, which has created favorable conditions for the spread of the disease).

Traditions and customs of the inhabitants of Bangladesh

Bengalis who live mostly in the villages, sothen, subject to the pagan rituals and traditions. For example, to see an empty jug, the corpse of a bird or a willow branch on the road - this is an unfavorable sign for any initiatives (new business, travel).

If it's a boy - for Bengalis is luck,It can not be said about the birth of his daughter, because she needs to collect the dowry, and after the wedding, she will go into subjection wife and his family, while the son will always help their parents.

Wedding traditions are interesting because the youngpeople will look for a partner, but this choice must be approved by the parents. Girls have the right to marry to 18, and the boys - 21 years (but if a guy does not work or earn enough money, parents have the right not to give him permission to marry). As for the wedding, then it must be present or the priest Mufti.

Going in Bangladesh? Since touching a stranger - a bad tone, welcoming the women or children, do not reach out. Men may shake hands, but only if they are familiar with. Thanks to this tradition, do not worry, that local merchants will you miss the elbow or clothing floors, as is done in some neighboring countries.

If you are thinking to visit a resident of Bangladesh, grab a small gift in the form of gifts, sweets, fruit, tobacco (in any case do not give money or alcohol).

Holidays in the UAE in February: prices and ...