Home>Articles about Bolivia>Bolivia Flag photo, history, the value of the state flag of Bolivia colors

Bolivia Flag photo, history, the value of the state flag of Bolivia colors 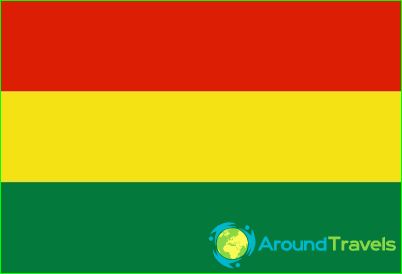 The national flag of the Plurinational State of Bolivia was adopted as the official symbol of the country in 1851.

Description and proportions of the flag of Bolivia

State flag of Bolivia has the rightrectangular. Length refers to the flag to its width in a ratio 22:15. Bolivia Flag - a classic tricolor flag is divided horizontally into three equal-field. Flag upper band has a bright red color, medium - yellow, and the lower field is colored dark green. In the center of the yellow band at an equal distance from the edges of the flag of Bolivia is a depiction of the emblem.
The central motif of the emblem on the flag of Bolivia isoval, enclosed in a bright blue frame. In the center of the oval is represented by Mount Potosi - famous peak of Bolivia, under it - the alpaca, which is the main symbol of the country's fauna. Sheaf of wheat and breadfruit on the arms represent agriculture. Six Flags, two crossed guns in the background on the arms of Bolivia are located, one of which - the Phrygian cap, muskets and ax. Crowns song condor - the main bird of the Andes mountain system.
Red box Bolivian flag symbolizes the blood,patriots shed in the struggle for the independence and sovereignty of the state. Yellow stripe - a reminder of the inexhaustible natural resources of the Bolivian interior. Yellow - the color of even Inca, the tribes that inhabited in ancient times Central and South America. The green flag is part of the hope for a better future, the desire of the people of Bolivia to the progress and development.

The history of the flag of Bolivia

Former Bolivian flags have always been made in thered-green-yellow range. Which existed in the years 1825-1826 the flag was a central horizontal band of red color on which the gold five-pointed star in a wreath of crossed branches. Above and below the red field bordered narrow dark green stripes.
In 1826, the country adopted a flag, on which threeequal width horizontal bands in the following order: yellow - top, red - in the center and green - bottom cloth. As such, the flag lasted until the fall of 1851.
The final form of the Bolivian flag was October 311851. Civil flag of the country coincides with the state, except that it is not represented by the coat of arms. At the military flag of Bolivia coat of arms is an additional green wreath of crossed branches.