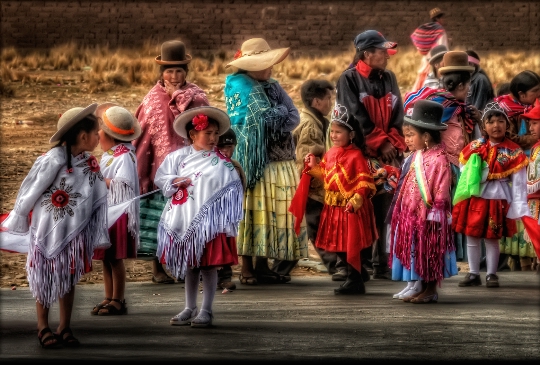 Plurinational State of Bolivia - is notset of epithets accompanying the name of the country, and its official name. Its validity is confirmed by the number of national languages: thirty-seven of them here, and this figure - an absolute world record. But Bolivia's tradition is not limited to such a Tower of Babel, and once in the country, llamas, salt lakes and shepherds Quechua, travelers are immersed in this South American exotic.

Mountains, coca and ladies in hats

The main sign that you are in Bolivia,- This endless mountain scenery unparalleled beauty outside the window. South American country is called Tibet, for most of its area is occupied by the majestic Andes. The second feature that allows you to accurately determine your own geographical coordinates and altitude - of coca leaves, which are sold everywhere. Chewing coca - an important tradition of Bolivia, to get rid of the effects of altitude sickness, and to get a burst of energy in the conditions of low oxygen content in the air.
But the ladies in hats - a representative of thethe beautiful half of the local Indian tribes. Their national costumes - bright and wide long skirts, elegant ponchos of wool and llama hats, will certainly complement everyday clothes. Huge Bolivian shawls used to carry children behind.

Most of Bolivia's traditions connected with reverencethe nature and the earth. The arrival of the new year the Indians Aymara coincides with the day of the solstice on 21 June. At this time in the southern hemisphere winter, but because the ceremony has a lot of bright people in warm clothes. The holiday begins with a tasting of national dishes, after which the participants are asked to the sun and the earth deity to give energy to the future harvest. Local shamans actively participate in the ceremony, bringing world-weary for the last year, to a state of order and harmony.
Indians Aymara traditionally settled bythe shores of Lake Titicaca. This alpine lake is revered by Bolivians, as the birthplace of the gods, but because on the day of arrival of the new year, it is also given to all kinds of honors.