Home>Articles on Brazil>Flag of Brazil: photo, history, the value of the state flag colors of Brazil

Flag of Brazil: photo, history, the value of the state flag colors of Brazil 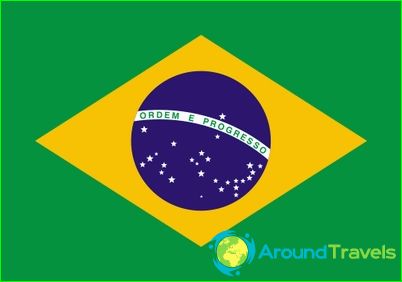 Brazilian flag - bright green, in the center ofwhich is a yellow diamond. In the middle of the diamond-shaped balloon is placed in dark blue with white stars of five ends in the amount of 27 pieces, showing 9 constellations, and ribbon, also white, which crosses the ball. On the ribbon was written motto, which states «Ordem e Progresso», which translated from Portuguese means "order and progress".
The national flag was legalized in the late XIXcentury, and the colors yellow and green have become the symbols of the state. With its forest resources, Amazonia, became symbols of the green, and huge reserves of gold have become the symbols of yellow.
National colors of Brazil on the otherhistorical legend, happened: the green - from clothing Braganza dynasty. Pedro I was the first emperor of Brazil and belonged to this dynasty. Yellow - by the Habsburgs and their black and gold colors. Habsburg Empress Maria was the wife of Pedro I. In 1822 Prince Pedro I, at that time he had not yet become emperor tore badge blue-white color with its headdress and announced that from now on it will be green and yellow. That same year signed decrees: the first - asserted the independence of Brazil, and the second - set a new symbolic badge, where the green color represents spring, yellow - a symbol of gold.
The stars on the flag are placed on the ball asif viewed from the meridian of Rio de Janeiro, however, such an arrangement is never visible on the sky. This pattern can be seen by watching stars from outside the firmament. For example, stars, depicting the constellation Scorpio, is strongly distorted. Location on the flag next to each other and Saul Antares implausible, in fact next to the head of the Scorpion is Antares, and to the end of the tail of the Scorpion is Saul, representing the "sting".
Each star represents a state of Brazil,a total of 26 pieces, and one devoted to the Federal District. Each star of a certain size and has its own name, and it belongs to some constellation. Five-pointed stars are depicted five dimensions, which consist 9 constellations. Initially, the flag of a number of stars equal to 21, but with the addition of staff, the number changed.
In 1992 he was formally adopted by modern Brazilian flag. Incidentally, a few days in 1889 lasted a temporary Brazilian flag, similar to the American flag.

The airport in Lugansk: diagram photo. How to get ...