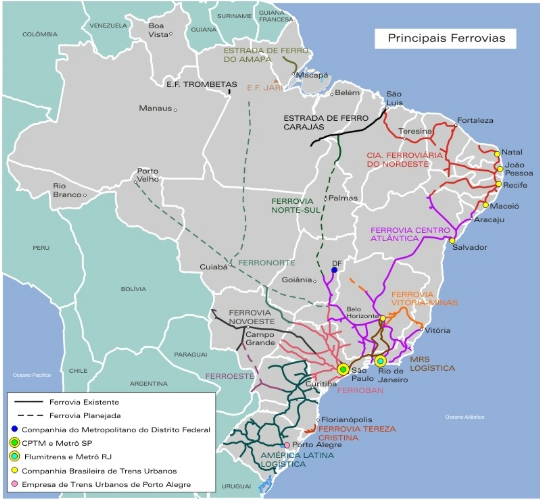 Brazil is investing heavily inthe development of the transport sector. In recent years, it increased the number of routes in the country, but the possibility of movement remains limited. Railroads Brazil is far behind European and American.

The transport system in different regions hasdifferences. South-western and southern regions of the economically developed better than others. Therefore, the people there are different means of transport available. In the Amazon region, in the north of the country, transportation is limited. The total length of the railway network is 29 000 km. It differs from European standards and needs to be upgraded. In Brazil, there is no railway international transport. Therefore, to get to this country by train is impossible. To the Brazilian border fits one w / d line in Bolivia: Santa Cruz - Puerto Quijarro. After completion of this travel route passenger approaches the boundary of Brazil. Then he has to go the way by car or bus. The railways of the country remain unprofitable for years.

Today, the railway transportation in the countryrepresented mainly tourist trains, which are used for excursions. One of the most popular routes passes through the Atlantic Forest. Domestically, passenger traffic occur, usually by road transport. Brazil's railways system is used for transportation. Passenger trains presented a commuter train and several trains plying around the big cities. Track width does not meet European standards.

Currently, the Brazilian territoryply only two passenger long-distance trains, wagons equipped with a seating area. They belong to the largest private enterprises in Brazil - VALE S. A. Marked above the train moved only in the daytime. Investment in the railway transport system in Brazil only began to do in recent years. This is planned to open several new routes in the near future. High-speed line will run between cities such as Campinas, Rio and São Paulo. We train local people not in great demand. According to Brazil's railways move the old trains, the level of service leaves much to be desired.

Rail transportation controlledpublic and private companies. . These include SuperVia, America Latina Logistica, etc. The scheme of routes and train schedule can be seen on the website of the Ministry of Transport: www.antt.gov.br.