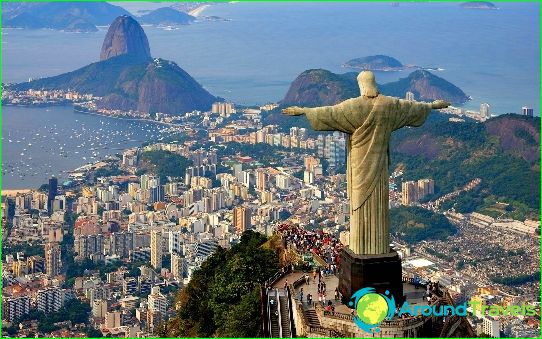 Season holiday in Brazil lasts all year round: there is always warm (average temperature - + 25-28 degrees). It is worth noting that, overall, for the coast is characterized by high humidity, for the central areas - more arid, and for mountains and the southern regions - cooler weather (December-January rainy and hot - air can be heated up to 40-42 degrees).

The tourist season in Brazil

The most favorable time to relax on the beaches of Brazil is November-April.

Dive season coincides with the beach, although if desiredadmire the underwater beauty at any time of the year. In local waters, you will be able to meet with the dolphins, sea turtles, sharks, manta rays, variety of corals, including the rare, huge mushrooms.

One of the best places for diving is the Abrolhos Marine Park - in the local warm waters of the usual number of fish and corals (here is the biggest underwater coral cliff in the world).

Watch the fish and turtles without special equipment can be on a reef island Recife das Areyas with natural pools.

To dive dives may prefer Siriba sea caves, the island of Santa Barbara, wrecks Vera (it is on the 20-meter depth).

Season in Miami. When the holiday season ...