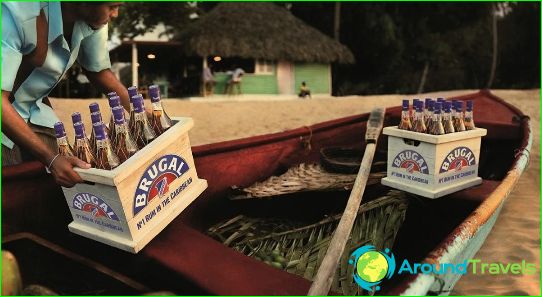 Caribbean - like a necklace strung withit beads, islands, each of which in its bright and original. Still, the main pearl in the chain of world-class resort is considered to be Dominican. It is here - the white sand, turquoise sea and the most brightest nature. If we add to this festive palette drinks Dominican Republic, and the hospitality and kindness of local residents, lost any need for a long time to choose the venue for the next holiday.

Custom looks positively on the import of a literof spirits or two liters of wine. For larger volume may be asked to pay a fee, and the money is better spent on alcohol Dominican Republic, sold in every supermarket at very affordable price. Bottle of 0.5 liters of the famous local rum will cost no more than $ 10 (prices of 2014). By the way, the export of national drink may be limited only by capacity suitcase Dominican guest.

The national drink of the Dominican Republic

There are well-known so-called "three B". This three local rum varieties, each of which is worthy of the title "national drink of the Dominican Republic." Three brothers - Brugal, Barselo and Bermudes - produced in the second half of the nineteenth century and are considered global brands of the same dignity as Champagne in France and tequila in Mexico.
Brugal Rum is named after the founder of the factoryin the Dominican Republic Andres Brugala Montaner. It was he who originated the idea of ​​the production of the national drink. Spaniard who emigrated from Cuba brought with him many secrets romovareniya, and today the alcohol produced by his descendants, the Caribbean is considered one of the best. Among its varieties:

For fans of light alcohol Dominican RepublicIt offers a variety of cocktails based on the famous novel, Chilean wines sold here in a large quantitative and several varieties of local beer. The most famous beer brands - "Quisqueya" and "President". In general, alcoholic beverages Dominican Republic, their quality and range make it possible to find a suitable for every traveler.