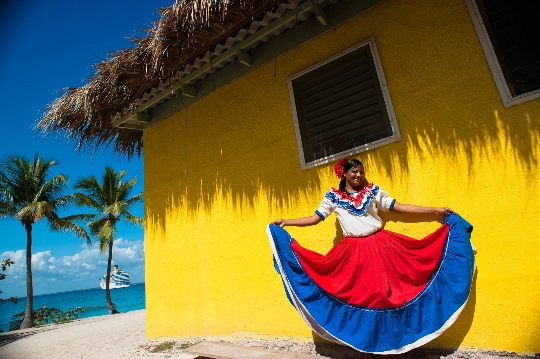 Dominican Republic - one of the most popularresorts in the Caribbean region, where Russian travelers are increasingly booking of tours, despite the long flight and not too cheap. Traditions Dominican Republic and its culture is implicated in the Indian customs, Spanish and African immigrants, are no less interesting for the guests than its white beaches and eternal summer.

You talk to Taino?

This motto of the island - not just words. Caribbean dances - an important part of the culture and traditions of the Dominican Republic. Hearing motive bachata or rumba, few can resist here, so as not to slide to the beat of the music. Dance can express all Dominicans - the pain of loss, the joy of meeting, unrequited love and delight.
For tourists, the island opened a dance school whereYou can take lessons to go home a different person. Caribbean dances help to stay afloat in any situation and with dignity experience life shocks. That is why Dominicans always smiling and do not hang up his nose, even in difficult times.

Mañana in the Caribbean

Europeans are accustomed to punctuality, somefeatures of the national character of the locals may confound. It is not made to rush and bustle, but because of delay in the appointment of the Dominican - a common occurrence. In the tradition of the Dominican Republic, as in many other countries in the region - enjoy a leisurely life.
"Mañana" means in Spanish"tomorrow". But the deeper meaning of this concept lies in the fact that you need to relax and enjoy everything that surrounds you. Mañana - it's an amazing feeling, which is not only a tradition of the Dominican Republic, but also the way of life of any traveler, stranded on an island.
And here we decided to try cocktails, expertlycooked cute bartender right on the beach, dancing in the company of the pretty mulatto and greet the dawn at the edge of the water, which is always in the Caribbean has to swim.