Home>Articles about Haiti>Haiti Flag photo, history, meaning of colors of the national flag of Haiti

Haiti Flag photo, history, meaning of colors of the national flag of Haiti 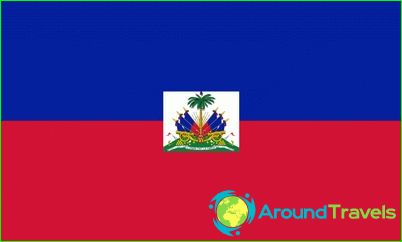 The Republic of Haiti's state chief symbol was approved in February 1986.

Description and proportions of the flag of Haiti

Flag of Haiti has a rectangular shape asthe vast majority of the flags of other world powers. The flag is divided horizontally into two equal parts to each other. The upper band of the flag of Haiti - dark blue and the bottom is red. In the center of the flag is applied to the coat of arms of Haiti on white quadrangular field. Just as the state looks and war flag of Haiti, but the civil flag is not the emblem in the center.
In proportion to the part of the Haitian flag related to each other as 5: 3.
The red color on the flag symbolizes Haitimulattoes, living on the island, and the blue - black population. Both colors date back to the colors of the French flag, whose colony has long been a country of Haiti. Today, blue and red on the flag symbolize the country's only peaceful coexistence of Union and mulattos and Afro-descendants in the territory of Haiti.
Coat of arms of the country inflicted on the modern flagHaiti was officially approved in 1807. In the central part is a palm tree, which is crowned by the symbol of freedom - two color Phrygian cap. Around the palm placed the spoils of war: an anchor and cannon balls, guns themselves, axes and guns. On a green field with gold chains applied scraps - a reminder of the colonial past of the country, and is surrounded by palm-six battle flags of the Haitian national colors. On the white ribbon at the foot of trees traced Haitian state motto "Union makes strength."

The history of the flag of Haiti

The first flag in the history of the free Republic of HaitiIt was adopted in 1804, when the country gained independence from France. It was a flag divided horizontally into two equal margins: top - blue, and the lower - red. A year later, the country adopted a new flag, on which two identical bandwidth were inscribed vertically. Black was located closer to the shaft, and red - on the free edge of the flag.
Over the next 1806 years, the country 150several times changed the political structure and appearance of the main character of the state. She became the state, the kingdom, the Empire, the republic. The flag that there are various options for the coat of arms, it disappeared altogether. Bands on the panel placed vertically or horizontally, and their color changes to bright red and black to light blue and dark pink. Today's version of the state flag of Haiti was finally approved in 1986 after the overthrow of the ruling clan Duvalier.