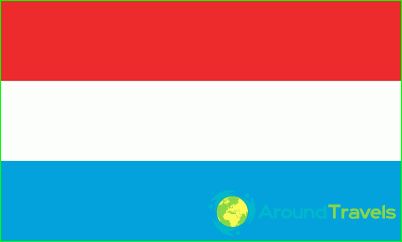 Flag of the Grand Duchy of Luxembourg, the diminutive state in Western Europe, was formally established in 1972.

Description and proportions of the flag of Luxembourg

The national flag of Luxembourg isa rectangle whose sides relate to each other in accordance with the proportion of 3: 5. Flag is an official symbol along with the coat of arms and anthem of Luxembourg.
Flag of Luxembourg - a traditional tricolor andThree equivalent width horizontal strips located on its field. The top has a bright red color, medium - white, and the lower band is applied to a light blue.

The history of the flag of Luxembourg

The first flag was adopted in Luxembourg in 1815King of the Netherlands Willem, who ascended to the throne, and became the Grand Duke of Luxembourg. From the official symbol of Holland cloth Luxembourg differ only in the lower band, which had a somewhat lighter shade of blue.
In 1972, Luxembourg's flag was officiallyapproved by Parliament, and after 20 years, the bottom of the flag field is made even more light to the similarity with the state flag of the Netherlands has become even less visible.
Civil courts of Luxembourg used a flag"Red Lion", which on the background of five alternating white and blue horizontal bands of five shows a red lion standing on its hind legs. His head is crowned with a golden crown, tongue and claws on a gold paint made paws. Red Lion is depicted on the coat of arms of the Grand Duchy of Luxembourg, where he was decorated with the figure of a heraldic shield, crowned Grand Ducal crown.
Chairman of a parliamentary faction introduceda proposal to replace the national flag of Luxembourg flag on the "Red Lion". His proposal met with the approval of the absolute majority of the population. 90 percent of survey participants, conducted by one of the radio stations, have voted for the introduction of "Red Lion" flag as a state.
Once it was a generic banner flagLuxembourg home, and its history dates back to the XIII century. However, MPs are in no hurry to adopt a new law on the national flag of Luxembourg, and is "Red Lion" waiting in the wings, when he will be able to replace the country's current on flagpoles tricolor.

Bus tours to Poland. The cost of bus tours ...