Home>Articles on Mexico>Articles about Cancun>The airport in Cancun: a diagram photo. How to get to Cancun airport

The airport in Cancun: a diagram photo. How to get to Cancun airport

Articles about Cancun
by aroundtravels 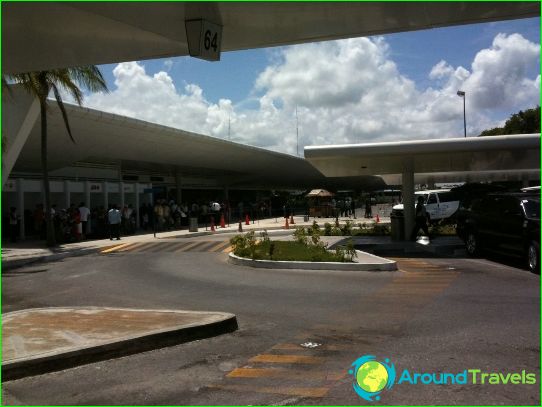 The second most important airport in Mexico is located in Konkun. The airport is located about 15 km from the city.
He is among the five busiest airports in Latin America, behind Mexico City airport, the two airports of the city of São Paulo and the airport in Bogota.
Annual passenger traffic has been steadily increasing, only 12 million mark was exceeded in 2008, and it has made the second most important airport.

It is clear that the airport in Cancun sufficiently provided in technical terms and in terms of security. At the moment it has three terminals, each of which performs a role.

In total, the airport in Cancun has 47 departure gates.

In terms of diversity and quality of services to the airport than not inferior to other international airports in the world. Like everywhere else work here cafes and restaurants, banks, ATMs, post office, etc.
Very well developed business activity, the passenger can buy different souvenirs and decorations.
Particular attention is paid to security.

There are several ways to get to the cityfrom airport. The most simple and cheap - this bus. From Terminal 2 at intervals bus leaves in 30 minutes, which should be up to the city bus station. Ticket price will be only $ 4. From there you can get to almost anywhere in the city, including to the right of the hotel, the bus R1. The fare on the bus will be $ 1.
Large group of tourists, up to 10 people for $ 35 can hire a special mini-bass, which also takes travelers directly to the hotel. The service is available at any time of the day.
Additionally, you can contact the company that provides car rental, and get to your destination yourself.
The most expensive way to travel - a taxi. The prices here are very high. For example discussed above route to the hotel by bus will be only $ 5, and the taxi drivers for the same distance can request from 20 to 100 dollars.

Children's camps in Krasnodar in the summer. Children's ...