Mexico Capital: card photo. What is the capital of Mexico?

Mexico City - the capital of Mexico 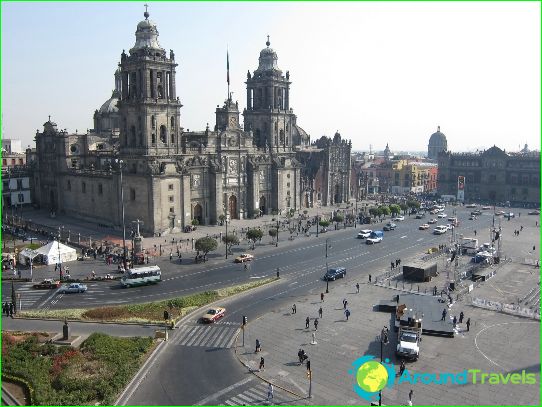 Mexico's capital, Mexico City, is located in thecenter of the country. Neighborhood of the city - almost continuous mountains and volcanoes, so one of the largest cities of the world does not refer to the most environmentally friendly cities in the world. But that is no reason to postpone the trip because the local attractions are worth it to spend a few unforgettable days.

Mexico City - one of the most interesting places in Latin America. Let's take a walk through the city.

In any Spanish colonial city certainlythere was an area on which the cathedral and the government buildings. Zocalo - the main square of Mexico City, located in the historical center. Its official name of Constitution Square, but the locals do not call her so. For all she's just juice.

During the reign of the Aztecs held hereall meetings. During the colonization of the area became the site of the coronation, military parades and other such events. Today, the area also plays the role of a place where traditionally gather to celebrate the city's residents.

The building served as the residence for almost allgovernors of New Spain. After Mexico gained its independence, the palace served as a shelter for two more emperors and later the first president of the country.

Today the palace is a meeting place for passing on the highest level. But at the same time most of the room, halls and rooms, freely visited by numerous tourists.

Quite a colorful district of the capital. He is known for its canals and artificial islands. Here you can ride on a small boat, vaguely reminiscent of a gondola in Venice. Channels and islands that exist here since the days of the reign of the Aztecs, are included in the UNESCO World Heritage List.

Basilica of St. Mary of Guadalupe

The Basilica is one of the most important Catholiccountry churches. Here is the image of Guadalupe, who is very honored among the country's inhabitants. The building of the Basilica was built on the site where the Virgin poor peasant.

Construction was started in 1785 and completedin 1863, when the country had gained its independence. Chapultepec is located on the top of a hill, the once revered by the Aztecs as a sacred place. Then the castle was built here, which is now one of the largest museums in the city.

This is the only lock on the entire American continent, which served as a residence for the royal family - Emperor Maximilian I of Mexico and his wife.

Rest in Thailand in June: prices and ...

Currency in Singapore: the exchange, importation, money. What ...