Home>Articles on Mexico>Mexico Flag photo, history, the value of the state flag colors of Mexico

Mexico Flag photo, history, the value of the state flag colors of Mexico 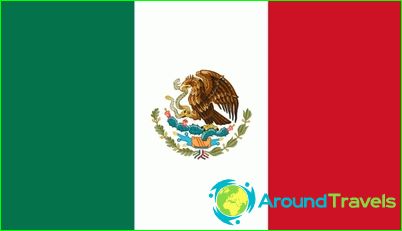 Mexican Flag has a classic rectangularshape and includes three equal magnitude vertical strip with a proportion of 4: 7. In the center, a white band depicts the Mexican coat of arms. The right lane is green, indicating the hope of the people and the fertility of the local soil. White is associated with spiritual purity and the red recalls the blood that was shed in the battles for the independence of the country. The stamp depicts an eagle as a sign, and the choice is not accidental. There is a legend about the Aztec god Huitzilopochtli that the Aztecs said that in the habitable earth, they should find an eagle, which will sit among the rocks on top of a cactus is the ground. Tradition says that the place where such an eagle was found, they built the first temple in honor of the god said. However, there is another variation of this legend that found an eagle pecked the snake. That is why the current Mexican flag he is depicted with reptilian in its beak. The flag with the coat of arms was officially adopted in 1968 16.09.
As for the flag of the country, it has its ownunique history. He first began to appear after the victory in the battle for independence. One of the heroes of this war, Costil and Don Miguel Hidalgo in 1810, represented the Holy Virgin of Guadalupe on the rebel flag. But in 1815 the Supreme Congress passed for three banners: commercial, military and parliamentary. Military banner consisted of blue and white squares, staggered, and had an eagle in the center.
Other rebel leaders used differentflags, but in February 1821, it was created prototype modern flag also composed of three bands of red, green and white colors, each of which star is located. The phrase written on the central band, said: "Religion, independence and unity." However, if the colors were slightly different value, such as the white was associated with religion, green - with independence, and red - to the unity of Mexicans.
After the introduction of the Republican regime in 1823 it was decided to get rid of the crown on the head of an eagle and a flag to decorate laurel and oak branches. In 1865, during the reign of Emperor Maximilian symbol of royal power still it was returned, it was not until 1880, when the government led by President P. Diaz.
However, those in power in 1916 Don Venustiano Carranza took the decree, which established that the eagle is depicted in profile, sitting on a prickly pear and the bottom is framed by oak and laurel branches. Eagle is now a symbol of the sun, giving people the light and life.