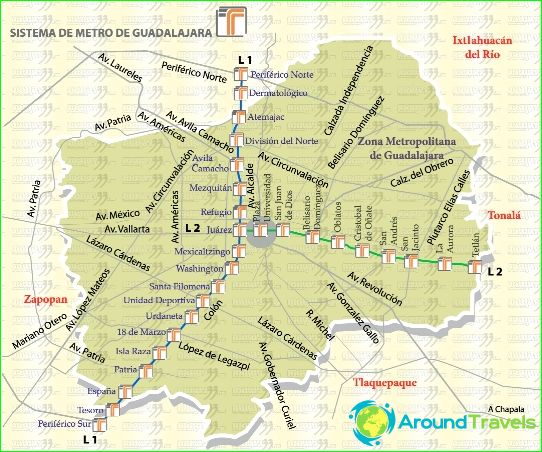 Metropolitan Guadalajara, the second largestthe city of Mexico, officially called Sistema de Tren Eléctrico Urbano and consists of two laid underground and on the surface of its lines. It is often referred to as "light" subway or light rail, because it is not a full-fledged metro that exist in other cities of the world. The total route length is 10 km, and the number of stations - 29, of which only a part is underground.
The construction of the Guadalajara metrothe government pushed inefficient urban transport system, which by the end of the 1980s was almost completely paralyzed by traffic jams. As a result, the first line was opened in 1989, connecting the beginning and the end of Avenida del Federalisimo - one of the main streets, crossing the city center.
A year later, the new Metro start to experience seriousoverload, but because the city authorities decided to build a second branch. She was commissioned in 1994, and today there are plans not only for its extension, but also for the construction of a third high-speed tram line. This was officially declared governor in 2009. According to preliminary information on the construction of the third line must be 800 million. Mexican pesos. In addition, the government plans - modernization of the first line, because today Guadalajara Metro carries about 50 million passengers annually.
The first line crosses the city from north to south andits length is 15.5 km. The second route begins in the center of Guadalajara, and train on it going in an easterly direction. The length of the second metro line Guadalajara - 8.8 km.
The rolling stock Metro has about 50cars that were built specially for Mexico because of its weather and climatic features. The maximum speed that develops Guadalajara light rail is 70 kilometers per hour.

Metro stations are opened every day in Guadalajara5 am and work until midnight. Range of motion is different formulations throughout the day. The shortest - about five minutes - during peak hours, in the rest of the time intervals between trains can be up to 10 minutes.

Tickets for the Metro Guadalajara