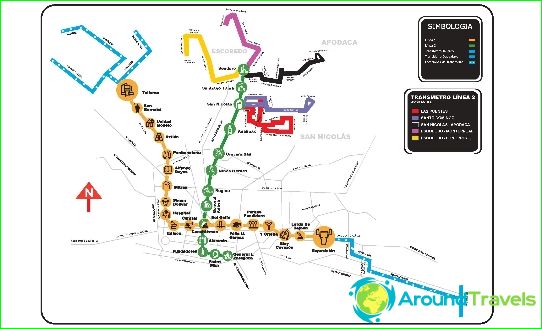 The capital of the Mexican state of Nuevo Leon - ishe four metropolis, an important role in the public transport system which plays a subway. He is the new metro system in the country and is a light rail services. Daily Monterrey metro services are used by more than 300 thousand. Man.
Metro The first phase was commissioned in April1991 line number one, which runs from north-west through the center of Monterrey to the east. Its length - 18.5 km, and it is laid parallel to the tram tracks, which the townspeople used previously. All the ways of the first line - the ground, and the ride along the route from the starting station to the end takes a little less than half an hour.
In the city center with lines 1 can make the transitionthe second metro line in Monterrey. Her first six stations were open for entry and exit of passengers in 1994. Then, the construction continued, and today the total length of metro lines of the city is 31 km and 32 stations operate for the needs of citizens and guests of the town. Stations in the city center and the path, mostly located underground and ground located in the suburbs. At the opening of new subway stations of Monterrey is always present Governor Natividad Gonzalez state. In 2008, during the commissioning of four new stations of line 2 in a ceremony attended by the President of Mexico, Felipe Calderon.
Metropolitan Monterrey is largely solved the problems withbusy urban traffic, but the traffic jams in the city and are increasing every year. That is why the government's plans of Nuevo Leon particular item is the continuation of works on construction and commissioning of new stations and lines of Monterrey Metro.
All stations Monterrey subway air conditioning, and the lines for the convenience of passengers indicated by two colors: the first - yellow, and the second - green.

Metro operates from 5 am to midnight daily. The average interval of trains is about four minutes during peak hours and 7 minutes during the rest of the day.

Tickets for the metro in Monterrey

The cost of one trip on the subway in the cityIt is 4.5 pesos, or approximately 0.34 US dollar. Tickets are available on a different number of trips from 15 to 85, and less expensive. For a multiple number of trips is to acquire MIA-cards, which cost 30 pesos and includes 8 included trips. Maps can be replenished in cash for the extension of their validity.