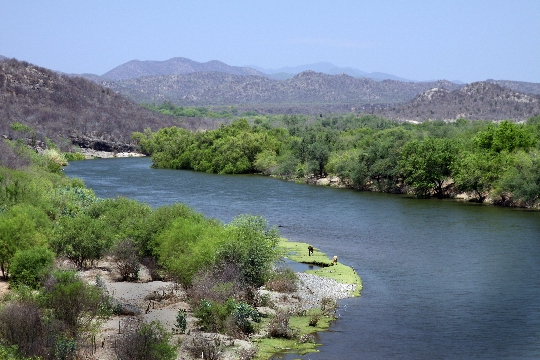 Rivers in Mexico, according to the direction of flow, may fall into the Gulf of Mexico, Caribbean Sea or the Pacific Ocean. But some countries are part of the river drainage basins.

Teuantapek - the country's largest river, the territoriallocated in the southern part (Oaxaca). The total length of the river bed - approximately two hundred and forty kilometers. The river flows into several smaller water flows. The waters of the river Teuantapek actively used living people on its banks.

The river belongs to two countries - Mexico and Guatemala. On the territory of Mexico river passes in its south-eastern part. The total length of the river - 560 km.

The river is not only the most affluent in theterritory of the country, but also throughout Central America. The source of the river is the confluence of two rivers - Salinas and Pasion. Usumacinta itself acts as a natural border between Guatemala and Chiapas (one of the border states of Mexico).

The river banks are interested in the tour plan, because there are the ruins of Mayan cities. And can be reached only by river and accompanied by experienced guides.

Grijalva is one of the largest and mostbeautiful rivers in the country. Especially picturesque delta. His name is obliged river Huano de Grijalva - conquistadors, who visited local places in 1518. Initially it was called Tabasco.

River has always played a special role. Originally - it is an important shipping channel. In today's world Grijalva riverbed cover several dams, and the most powerful hydroelectric power station provides electricity throughout the region.

Thanks to the beautiful river scenery attracts fans to travel by boat.

The bed of the river passes through the territory of the State of Veracruz(South of Mexico). Source Papaloapan River is located near the border of Mexico. It is formed by the confluence - Valle Nacional and Santo Domingo (they descend from the eastern Sierra Madre) and Tonto River. Billabong - Alvarado lagoon (located near the town of the same name). The total length of Papaloapan - hundred twenty and two kilometers.

River geographically wholly owned Mexicanand passes through the state of Sonora. Source Yaki - the foothills of the Sierra Madre Occidental. The total length of the bed - about seven hundred kilometers. Billabong - water Gulf of California (confluence is located near the town of Ciudad Obregon).

River at several places blocked by dams. And the largest reservoir is El Novillo. Water Yaks are widely used by local residents for irrigation of agricultural land. However, the river is the habitat of crocodiles ostrorylyh.

Cuisine of Cambodia: photo, dishes and recipes of the national ...