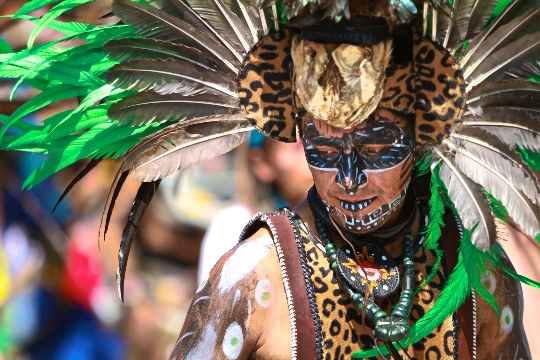 Mingling together, pre-Columbian Indian customsCentral America and the culture of the Spanish colonizers gave birth to a unique phenomenon, which is called now the Mexican traditions. Take a look at the local attractions, participate in ceremonies and celebrations, recharge your inexhaustible energy of local residents each year seek to hundreds of thousands of travelers from all over the world.

To be born to die

Extremely religious Mexicans one of thethe most important holiday is Christmas. On this day in every city people rush to temples, arrange funeral procession with the Virgin Mary, and Joseph, and biblical characters. In the evening the family gathers for a richly set table and its members give each other gifts.
But the most famous holiday,runs only in Mexico, is considered the Day of the Dead. Attitude to death, Mexicans are very light, they believe that the soul of the deceased falls to the gods, so do not worry about him. Every year on November 2 they visit the graves of relatives, decorate them and bring refreshments. The houses are covered with tables, and the streets are carnivals. Traditionally, Mexico's Day of the Dead flowers - orange marigolds, and candles to light the paths to the house to find the soul of the deceased to the road.

This question is on holidays in Mexican citiesnobody asks. Mariachi orchestras appear in honor of the birthday, wedding, funeral or national holidays by default. Wandering once music bands today play more for the soul than to earn money, but if such a splendid group will come to your table in the restaurant, drive them considered impolite. We need to listen to the end of a song to thank the musicians and a small tip.